Not only were people celebrating Independence Day there were many happy in love couples who got married over the 4th of July holiday weekend and we were fortunate enough to be a part of their special celebrations.

My 4th of July Weekend Weddings- Tampa, Florida started with Susan & Roy’s wedding on July 3rd. They were the cutest senior couple. They contacted me to officiate their ceremony in Crystal Beach. They wanted a simple sweet wedding with friends and family in the early afternoon. They wore matching shirts and both were very tearful throughout the vow reading. The wedding was at a little hidden gem on Crystal Beach overlooking the water. After the ceremony everyone was going over to Molly Goodhead’s to celebrate. 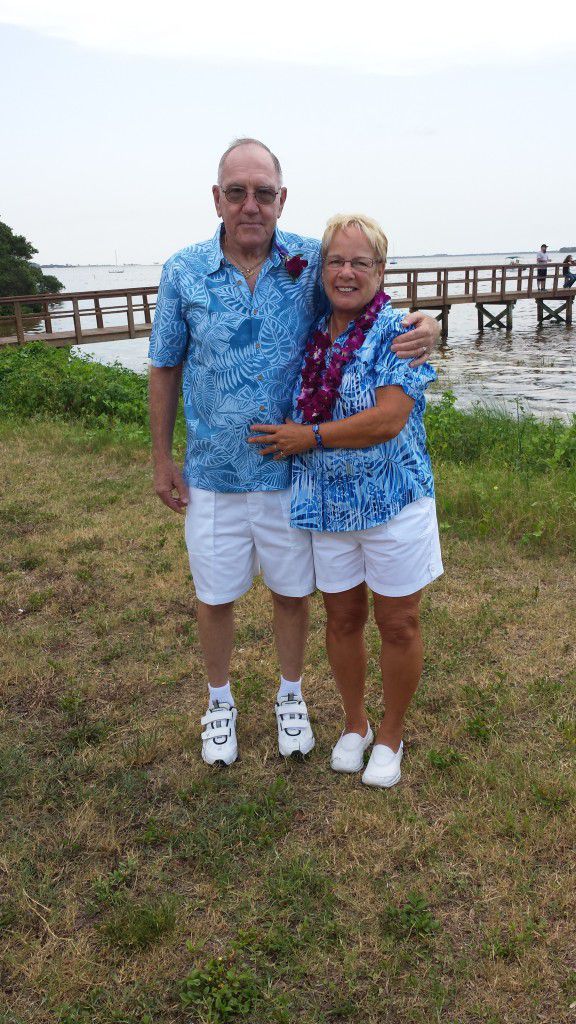 Alton contacted me and asked if I could officiate his wedding on July 4th. It was the anniversary of when he met his partner, Anthony. They didn’t care where the wedding was; just wanted a nice and simple ceremony. I suggested that he come to my home since the beaches would be so crowded on the 4th  and they agreed. We had a nice little ceremony in my backyard. Alton & Anthony were so happy. They were giggling and just having so much fun with each other. They were just so happy to be getting married. 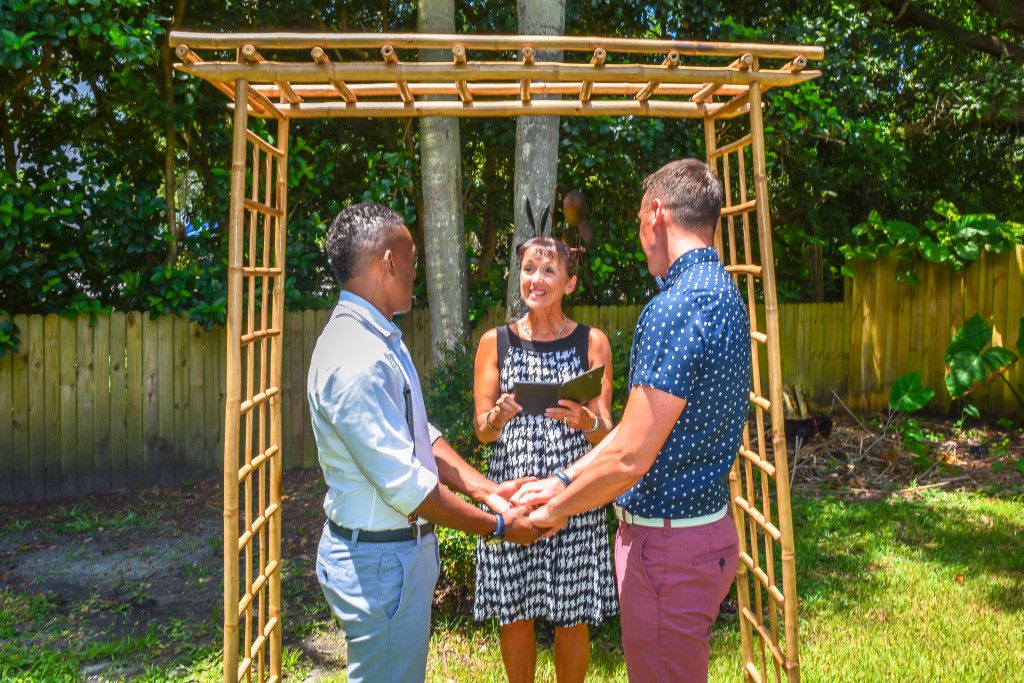 Officiating Alton and Anthony’s wedding ceremony in my backyard.  Photo by George Sr.

George Sr did photos for them, and had them do a lot of fun things for their photos. After the ceremony they hopped into their convertible headed down to Siesta Key for the weekend.  I received the nicest review from them saying, “Mr. and Mrs. Doumanian made our day as beautiful and simple as possible. They welcomed us in and were very professional. My husband and I couldn’t ask for a better 1st anniversary/wedding day!” 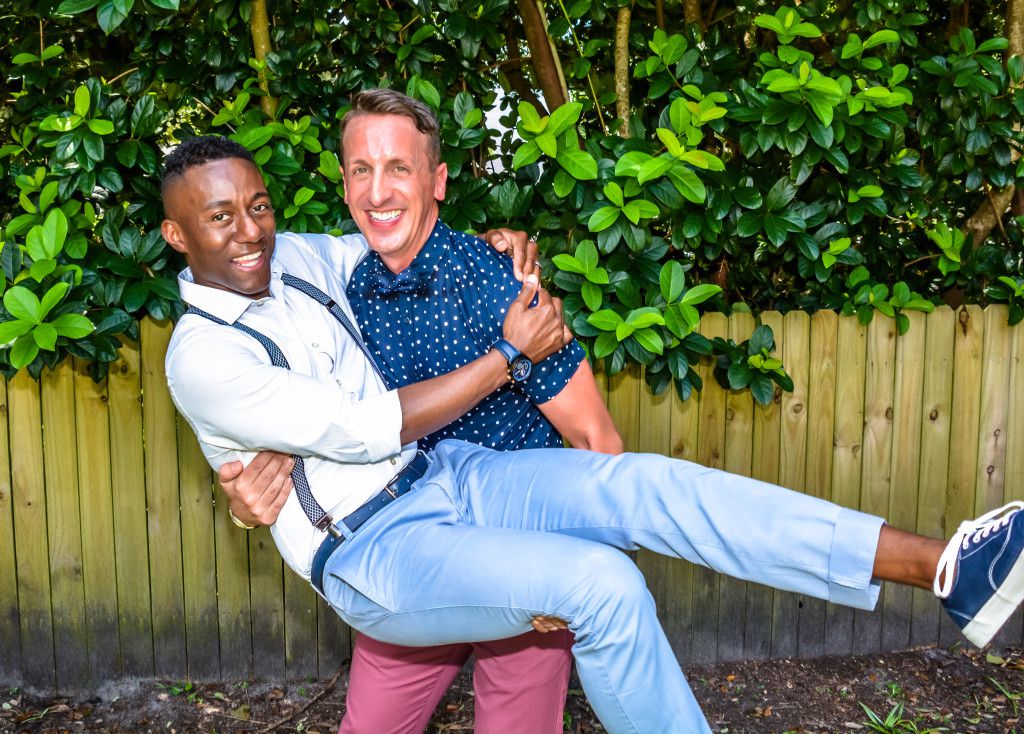 Later in the afternoon it was time for George Jr to perform a wedding. He performed a wedding for Davidde & Antoinette at Plantation on Crystal River. It was a beautiful evening. The wedding was held under the gazebo overlooking the Crystal River. Rebecca with CR Newman Photography took pictures. Davidde & Antoinette had a small beautiful wedding. George said they were just a fun loving couple. 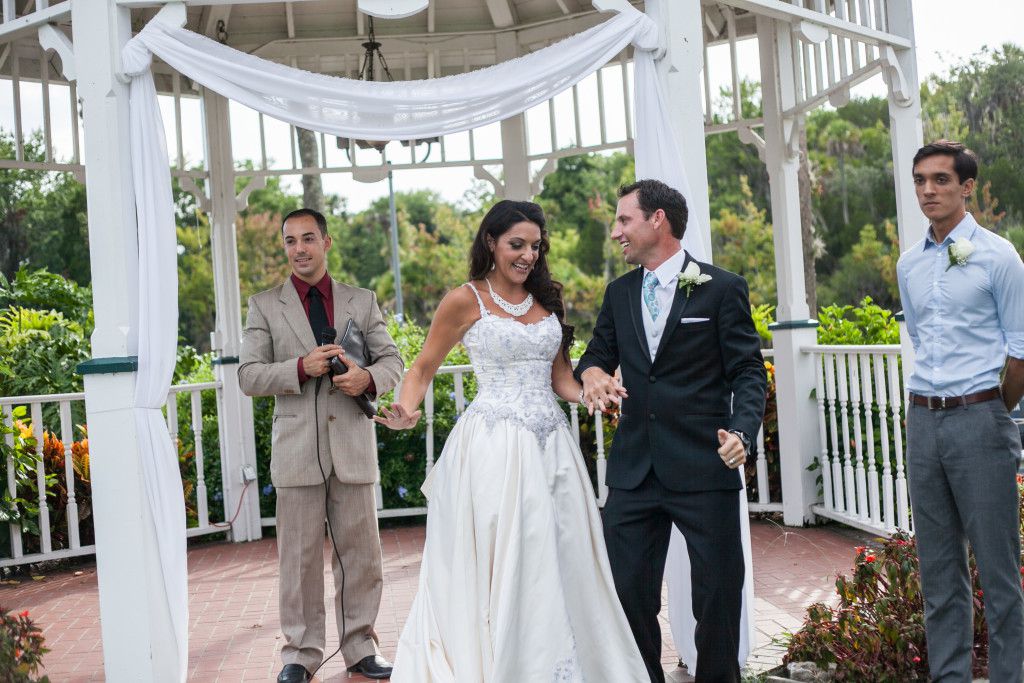 Our associate, Ellida, performed a wedding for Cliff & Alli. Cliff called me on Monday and wanted to have a wedding on Anclote Island off Tarpon Springs on July 4th with an officiant and photographer. I arranged for their officiant and photographer, Megan Pitts, to be picked up at Anclote Park. He then shuttled them over on a boat over to Anclote Island where the wedding ceremony took place. Their children were with them at the ceremony. Cliff and children were on t the island waiting for Alli. Rather than a limo Cliff arranged for his bride to be picked-up on a boat as the final member to arrive and brought over to the island. There youngest son was so cute. He arranged all the flowers on the sand and helped get everything get set up. 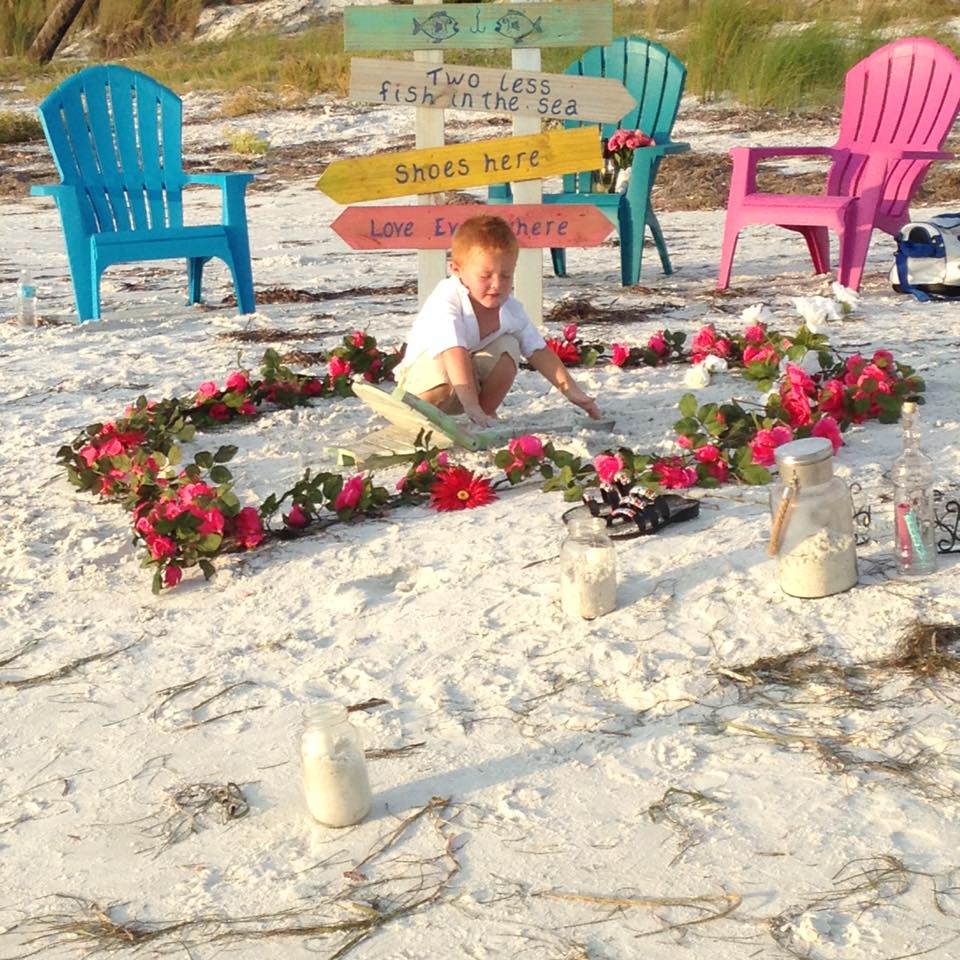 Alli and Cliff’s son arranging the flowers for the ceremony.

Again Cliff & Alli wanted a simple wedding. It was a very romantic wedding. 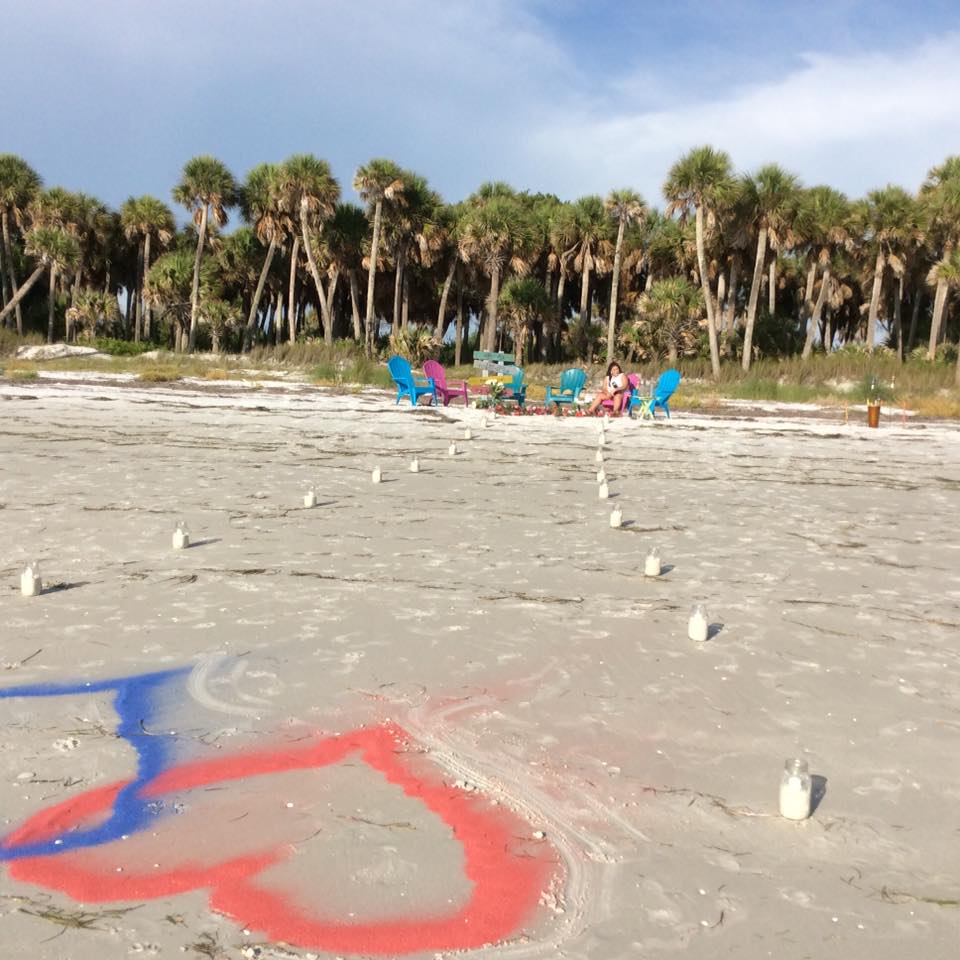 Alli e-mailed me the following day saying, “Thank you for the greatest ceremony ever.” 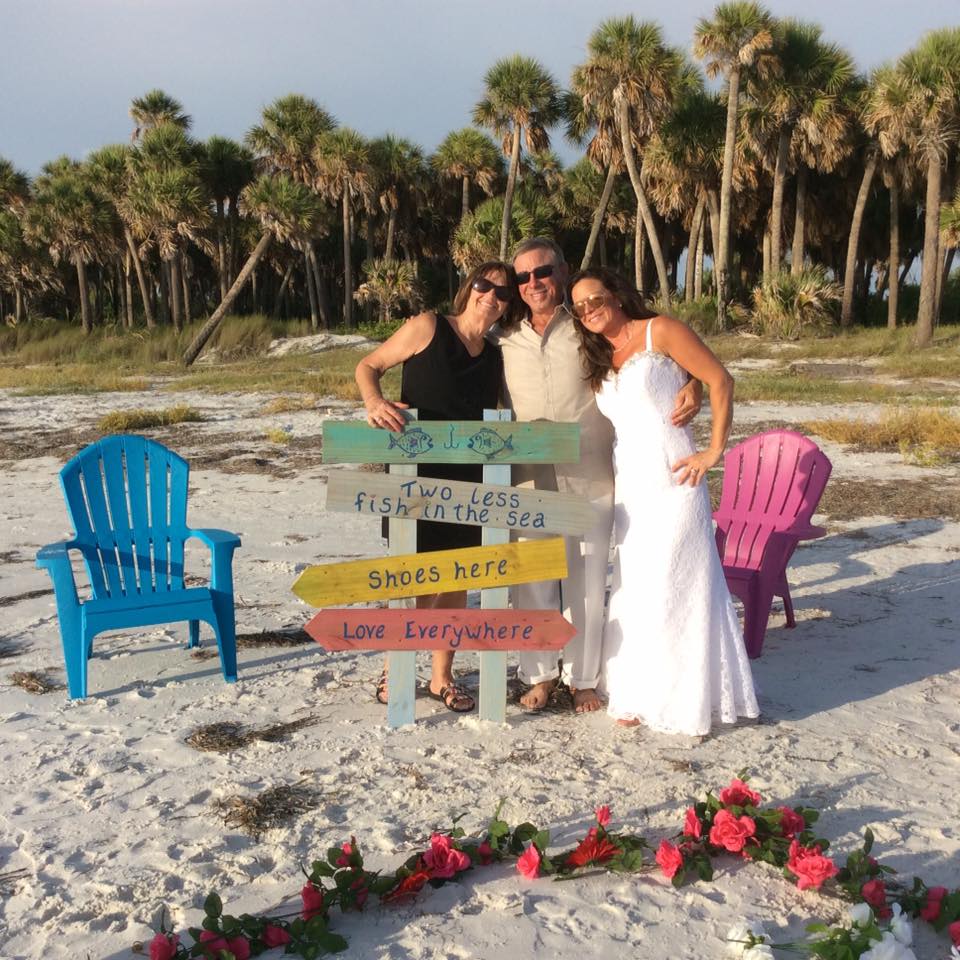 Ellida, Officiant, with the newly married Cliff and Alli at their4th of July wedding ceremony on Anclote Island

Our 4th of July Weekend Weddings- Tampa, Florida was great! It’s a VERY busy time in the Tampa Bay Florida area but we do our best to work with couples who want to celebrate with a wedding ceremony.