Currently, myself (Clearwater Commitment Ceremony Officiant) and all A Beautiful Wedding in Florida by A Notary On The Go officiants will happily perform commitment ceremonies for same sex partners, and should Florida pass the law on marriage equality we would gladly notarize a marriage license for any couple at a later time after a commitment ceremony at no additional cost.

We are very glad that popular TV shows like ABC’s Modern Family has helped open America’s eyes and hearts to the idea of same sex marriage.

I get calls from same sex couples wanting to have a commitment ceremony performed in Florida. I received a call the other day from a woman asking me if it was necessary to have an officiant to perform a commitment ceremony. I said the officiant wouldn’t be legalizing anything so no it wouldn’t be necessary. But I went on to explain that an officiant would be helpful in preparing the commitment ceremony vows and could perform the ceremony. She went on to say that it would be for two women. I could sense that she wanted to see if I had any hesitation or how I would respond. I was glad to offer suggestions and was very open about performing a commitment ceremony for her & her partner. We spoke about marriage equality in Florida and the hopes that same sex marriage will be legalized in Florida soon to come. She could see that I was very open to marriage equality and a true supporter. What touched me the most in our conversation was when she said,“It’s all about love.” What could say it better than two people who love each other and want to share their lives with each other. The woman, Marie, hired me as her Clearwater Commitment Ceremony Officiant for her March 14, 2015 Honeymoon Island wedding commitment ceremony. I have been working with her to create a ceremony that makes her and her partner happy. Since their marriage will not be legal in the state of Florida they’ve asked me to notarize a few legal documents prior to the ceremony; which I’ll gladly do for them. Marie is expecting about 140 family and friends to attend their commitment ceremony. I’ve enjoyed working with her so far and am sure her officiating her ceremony will be memorable and fun to be a part of. 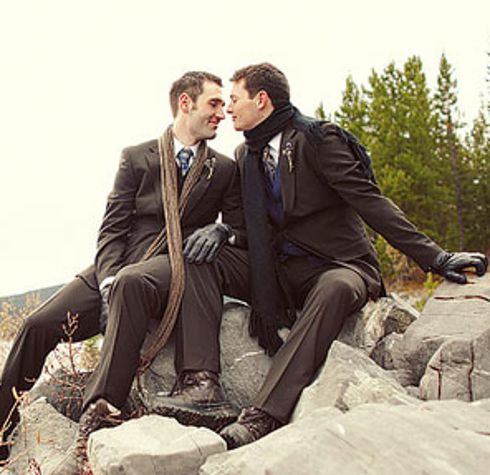 A recent article in Orlando Sentinel claims that three judges in three separate cases in Florida could rule any day now whether to overturn Florida’s ban on gay marriages. Marriage equality is good for everyone. Let’s hope that Florida steps up with the many other states in the nation and legalizes same sex marriages….because “It’s all about love”…right?

I always say that summer weddings in Florida are the best in the morning. The beaches are so still peaceful and by far less populated. Usually thunderstorms are in the afternoon so weather isn’t typically an issue. On July 15th,  it was a little different story for Samantha & Cory Clearwater Beach wedding in the morning. Dark clouds were all around and there were off and on squalls of rain showers. Fortunately, by the time of the ceremony the skies cleared up leaving the Clearwater Beach so tranquil with bright blue sky and puffy white clouds

Samantha and Cory were vacationing in Florida from West Virginia with their two children and Cory’s parents. Samantha wanted a short and sweet simple wedding on the beach. They wanted to have their wedding with their children and have the rest of the day to enjoy the beach. The ceremony was on the beach outside of the Hilton Inn where they were staying. The beach was quiet, the sand was white and soft, and the beach was just beautiful for a Clearwater Beach wedding in the morning. Samantha & Cory had the wedding that they wanted and then were going to enjoy the rest of the week in Florida. 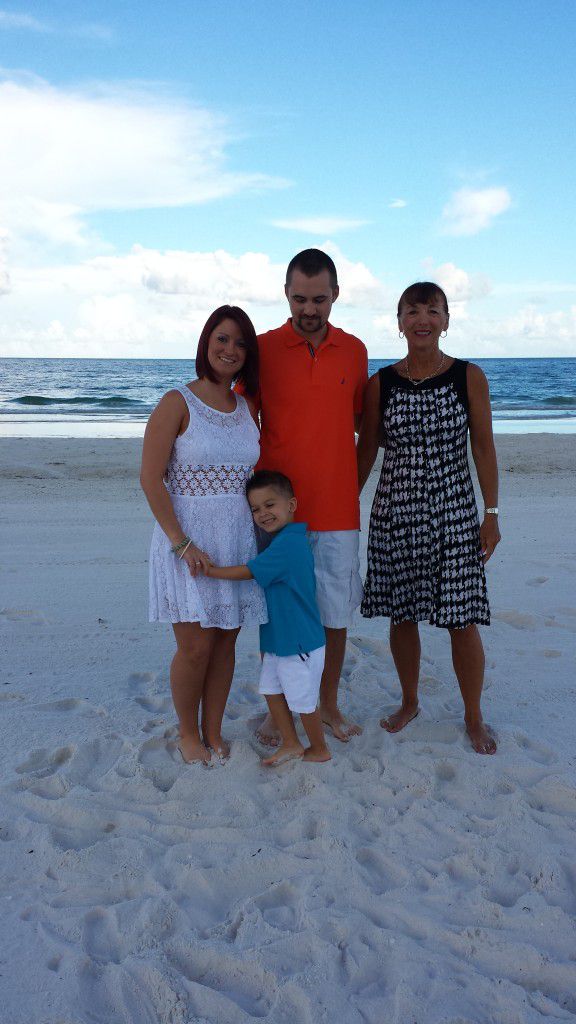 Samantha, Corey, their son, and me were  all smiles 🙂 after their short and sweet Clearwater Beach Wedding in the morning

For the past twelve years , I have been officiating weddings. It’s been such pleasure to meet so many wonderful couples and an honor to officiate their weddings. It’s also been wonderful to share this experience and opportunity with my family members who are also wedding officiants. We have worked with so many wonderful couples who continue to follow us on Facebook and occasionally share photos with us. We’ve even had a few times that we’ve run into couples we’ve married at their friends wedding ceremony or even had a few times where they’ve asked us to officiate their siblings wedding ceremony.

The first wedding I officiated was twelve years ago with David & Grace. David is actually my brother-in-law so I was very excited to perfom his wedding! 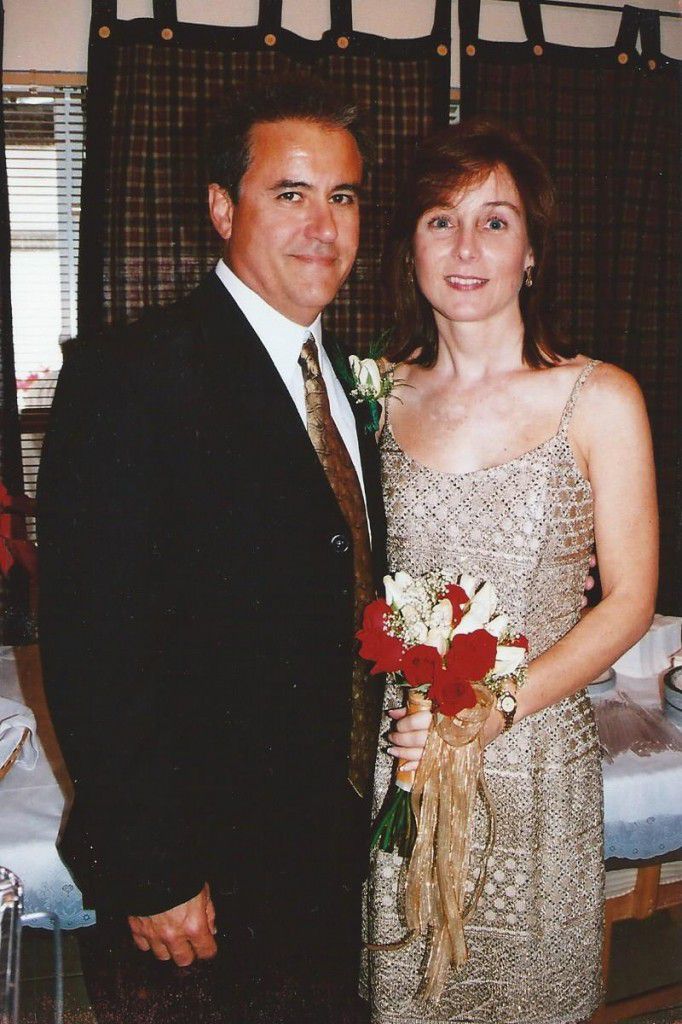 Most of the weddings I officiate make me very happy! 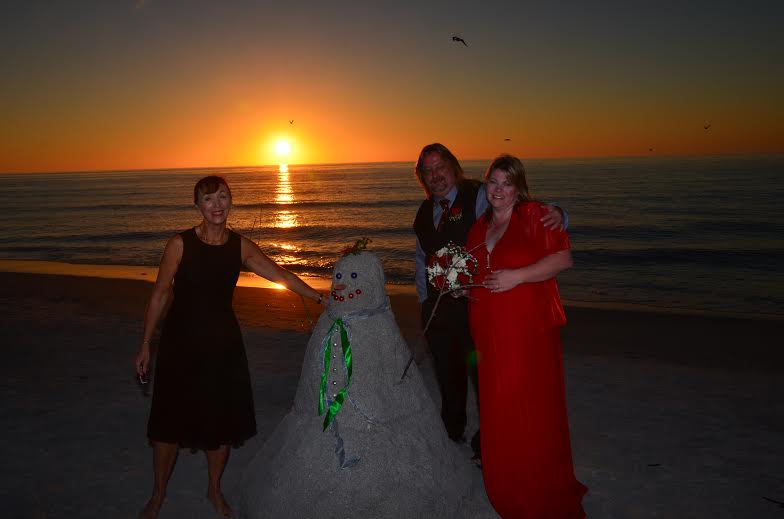 But last year a wedding I officiated touched me with so much sadness. April & Brian asked me to perform their wedding on Clearwater Beach. They were coming to Florida with their three children. They were going to be in Orlando and traveling to Clearwater for the wedding and a beach day– the kids had never been to the beach before. The family was being sent to Florida by Make a Wish because their daughter who, at the time, was 9 years old has cancer. She had cancer when she was five and with treatment went into remission. But sadly, the cancer came back and they elected not to pursue treatment. She was a beautiful little girl. She had a seizure while we were together and it was amazing to see the love this family had for her, and one another. It was so sad performing the ceremony and looking at their family knowing that the little girl wouldn’t be with them much longer. Brian and April wanted to get married with their entire family together and it was truly a special time with everyone was having fun at their first beach trip. 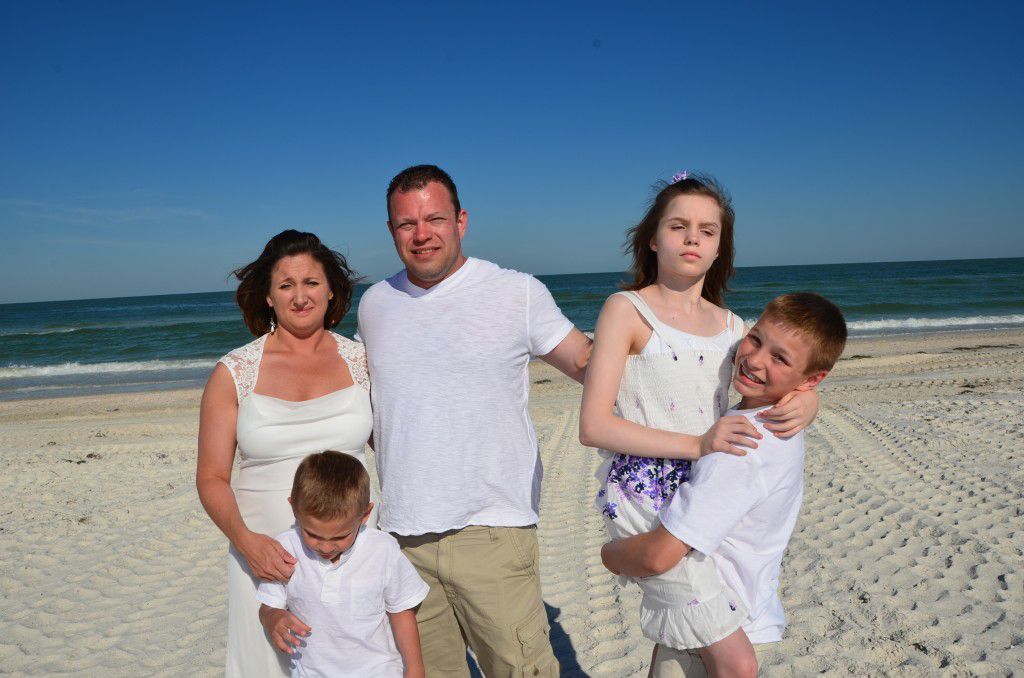 April and Brian with their beautiful family. Married on May 14, 2013 on Clearwater Beach. Photos by George Sr.

I’ve also had funny weddings. One time, I was asked to dress up as Elvis Presley for a Halloween wedding. Barbara & Bruce had their house all decorated for Halloween and wanted an Elvis themed wedding. It was so much fun! I wasn’t the only one in costume, Barbara & Bruce were in costumes also. My husband George Sr. was the photographer….their photos were by far not your typical wedding photos. 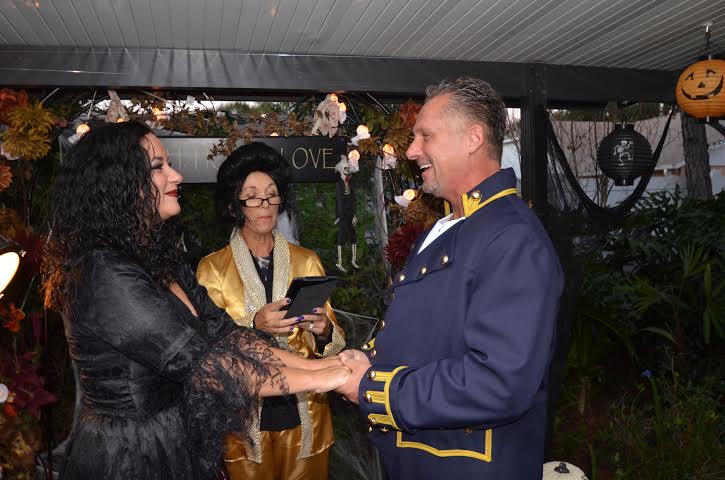 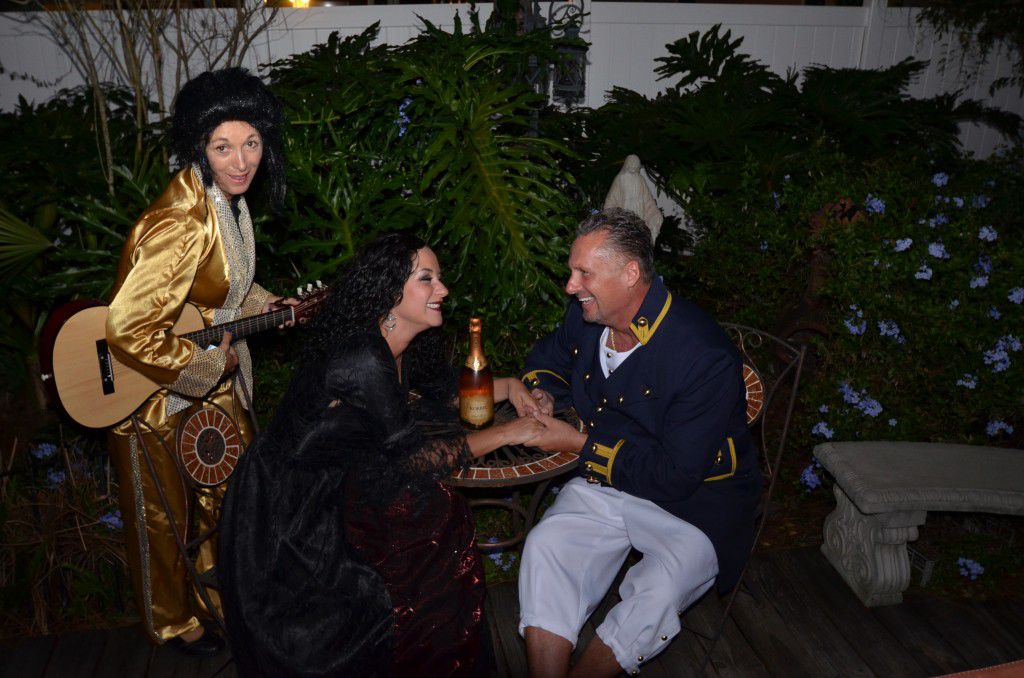 Having fun at Bruce and Barbara’s Halloween wedding. Photos by George Sr.

I’ve performed weddings at: parks, on beaches, at venues, in gardens, at homes, on boats, and even at a Chick-fil-A.  Small weddings, large weddings, simple weddings, vow renewals, LGBTQ commitment ceremonies, and more….I honestly can say, I’ve enjoyed them all!!!

My daughter, Amanda, began officiating weddings seven years ago while attending college at Florida State University. She continues to perform weddings in Tallahassee and the surrounding areas. 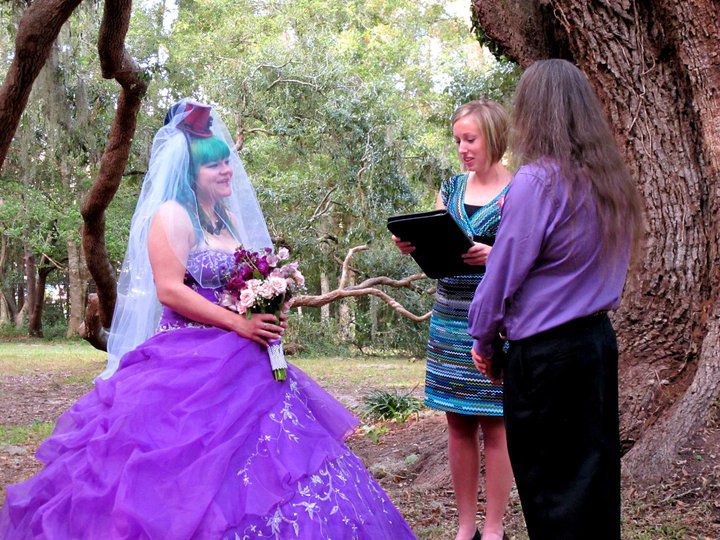 Amanda officiating a wedding at Lichgate on High Rd Tallahassee 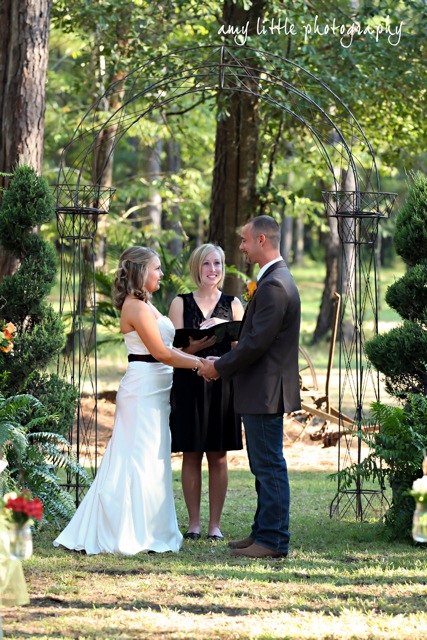 My son, George Jr., also began officiating weddings while attending college at the University of South Florida seven years ago. He is also fluent in Spanish and performs Spanish weddings throughout the Tampa Bay Clearwater area. 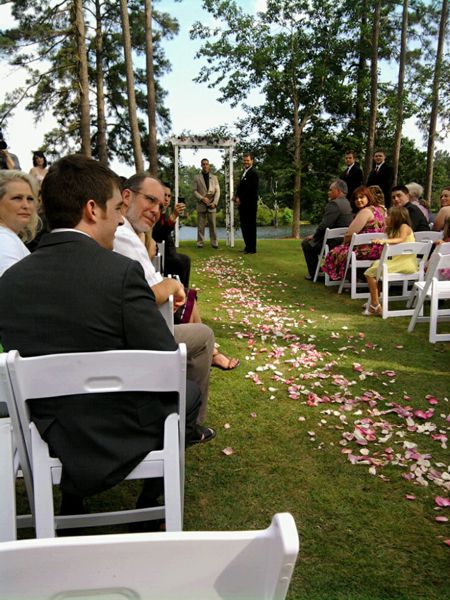 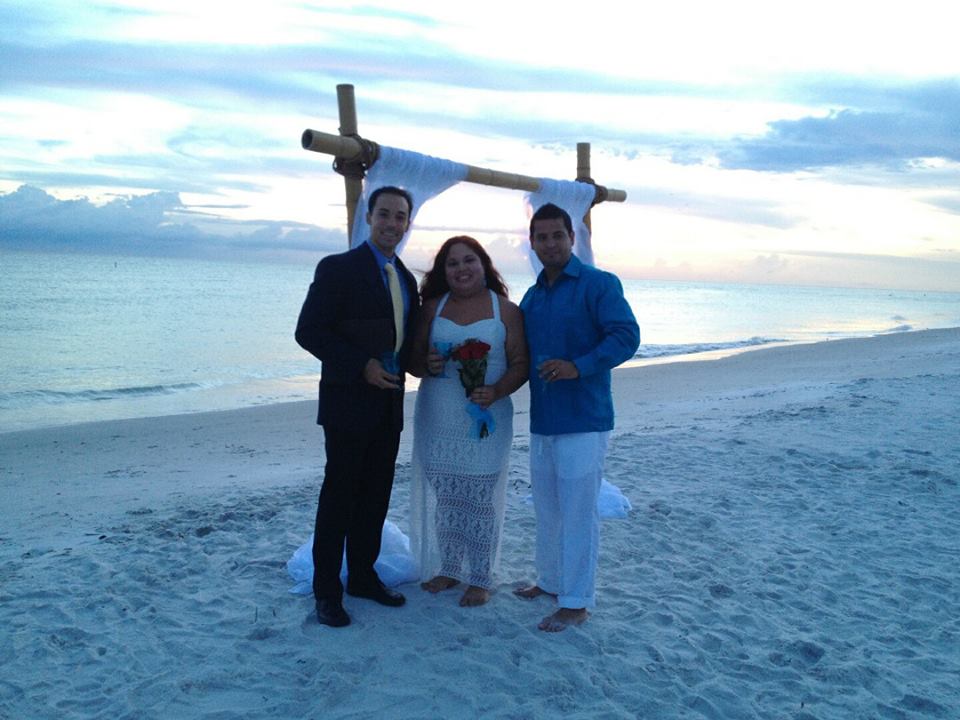 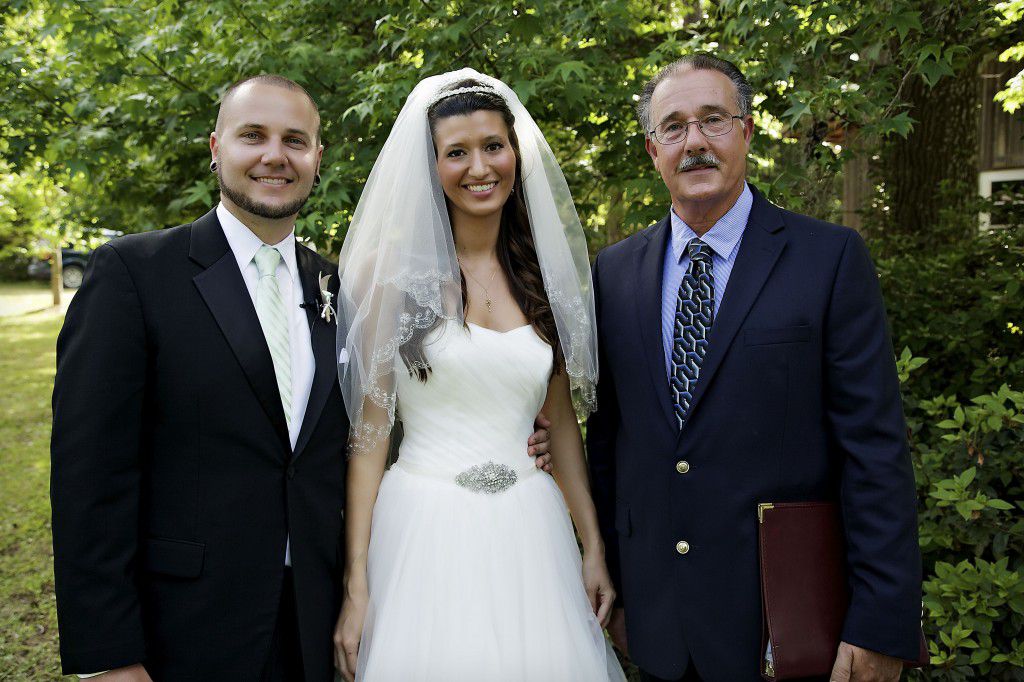 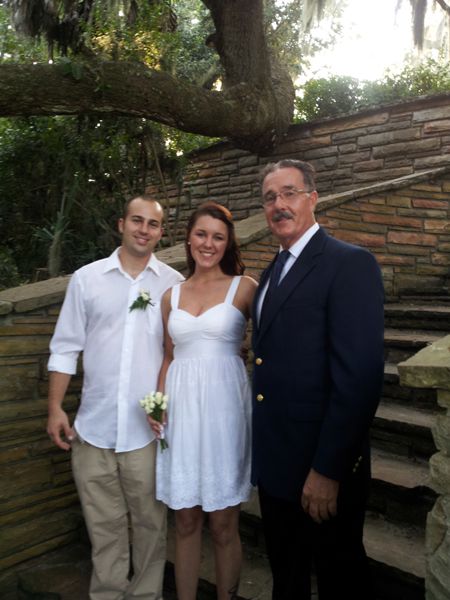 Whether you want a male, female, older male or older female, we have an officiant that will help make your wedding ceremony remarkable. We’ve all performed a number of weddings, happy, sad, funny, elegant, simple…whatever you want we will make happen! Take a look at more of the weddings performed at A Beautiful Wedding In Florida.

Warren told us that Larissa loved flowers, and I agreed that Sunken Gardens in St. Petersburg would be an ideal place for their ceremony. The Sunken Gardens has so many beautiful lush tropical plants, flowers, greenery & waterfalls. Larissa is from the island of Dominica in the West Indies and Warren is from Jamaica so they felt at home in the tropical gardens at Sunken Gardens.

On the day of the wedding, I notarized their marriage license in the lobby before the ceremony. 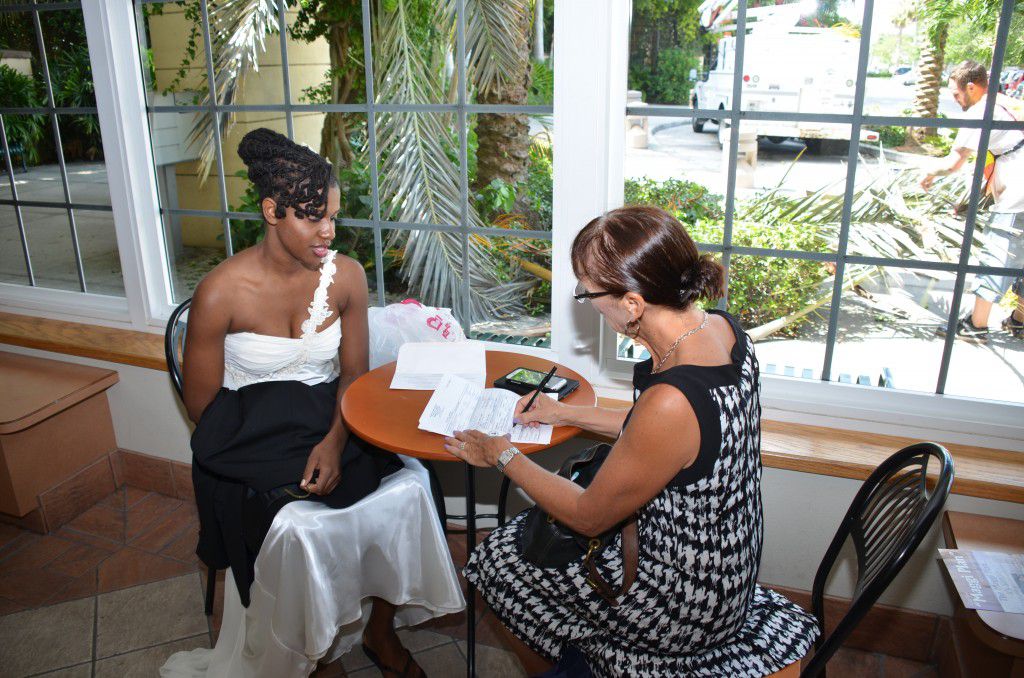 I like to take care of all the “business” aka marriage license before the ceremony so afterwards the couple can just enjoy! Photos by George Sr. 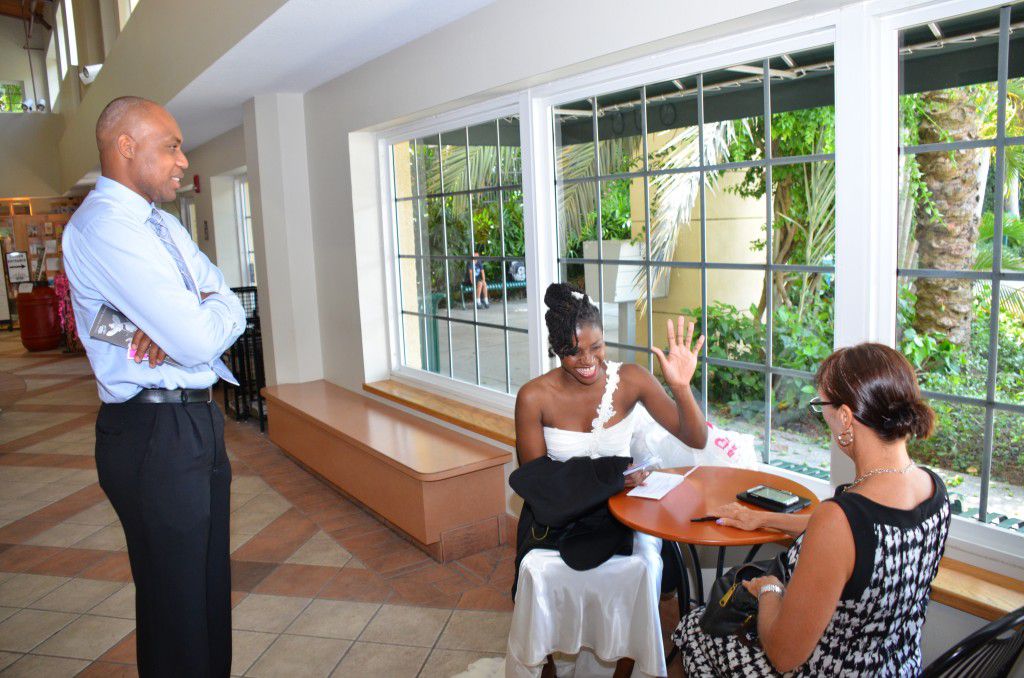 Having fun before the wedding. Photos by George Sr.

Then they strolled out to the Oak Pavilion for the ceremony. 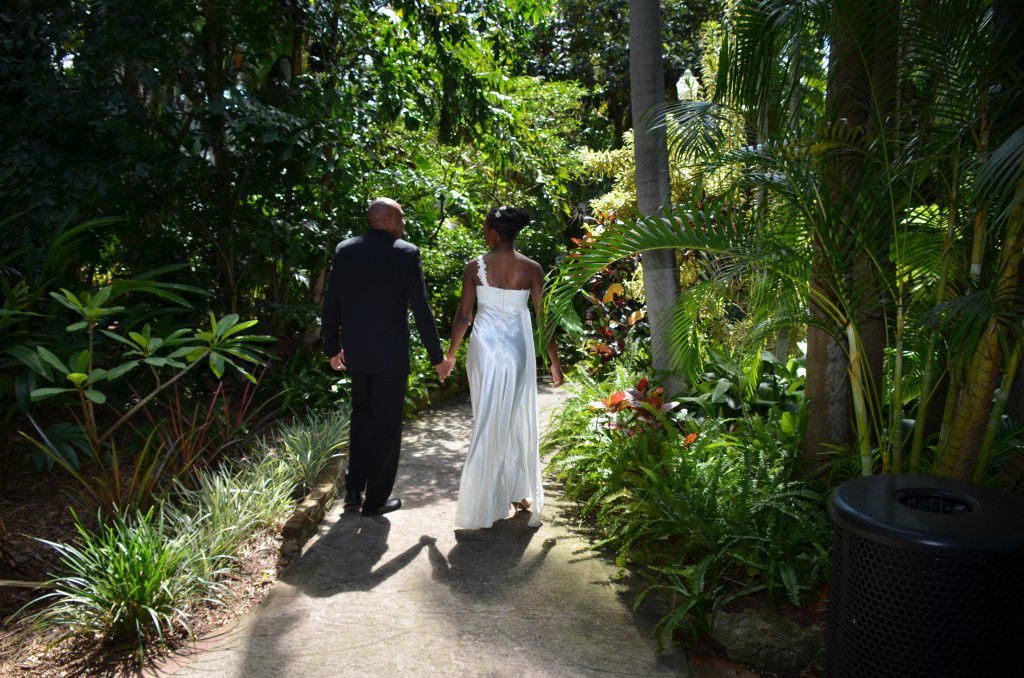 Heading to the ceremony spot. Photos by George Sr.

The flowers, birds, and plush greenery made such a romantic atmosphere for a wedding. George took photos before, after & during the wedding. He had them stroll over the bridge and into the Wedding Lawn. 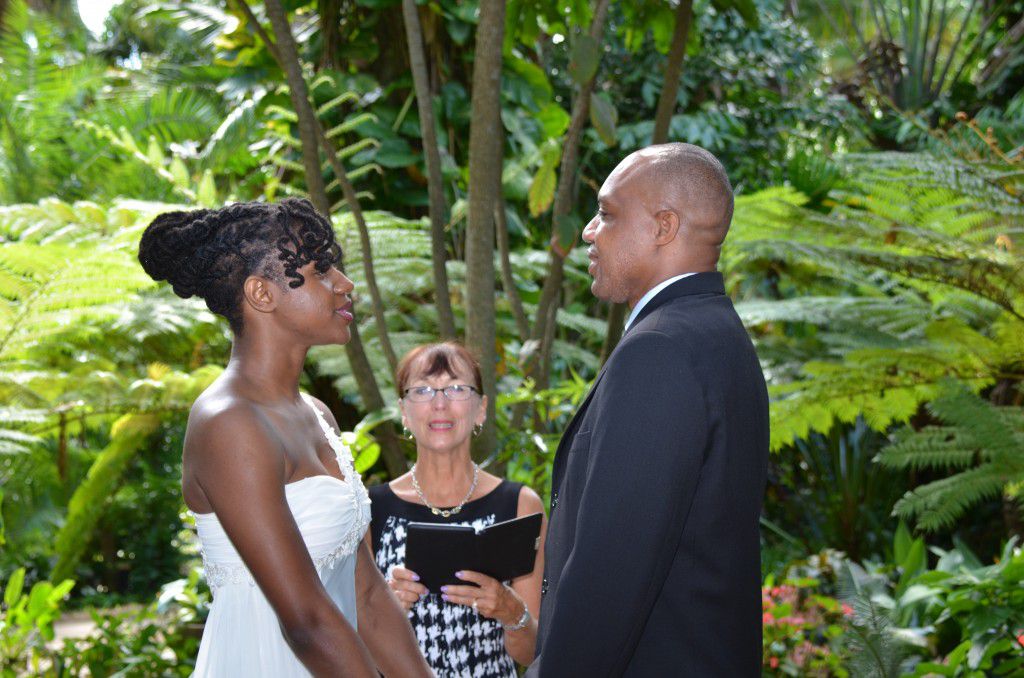 I performed a heartfelt, short and sweet ceremony. Photos by George Sr.

Warren & Larissa were very pleased with our wedding officiant and photography service.  In a review Warren said, “They did a good job!  Just what we wanted, straight and to the point.” 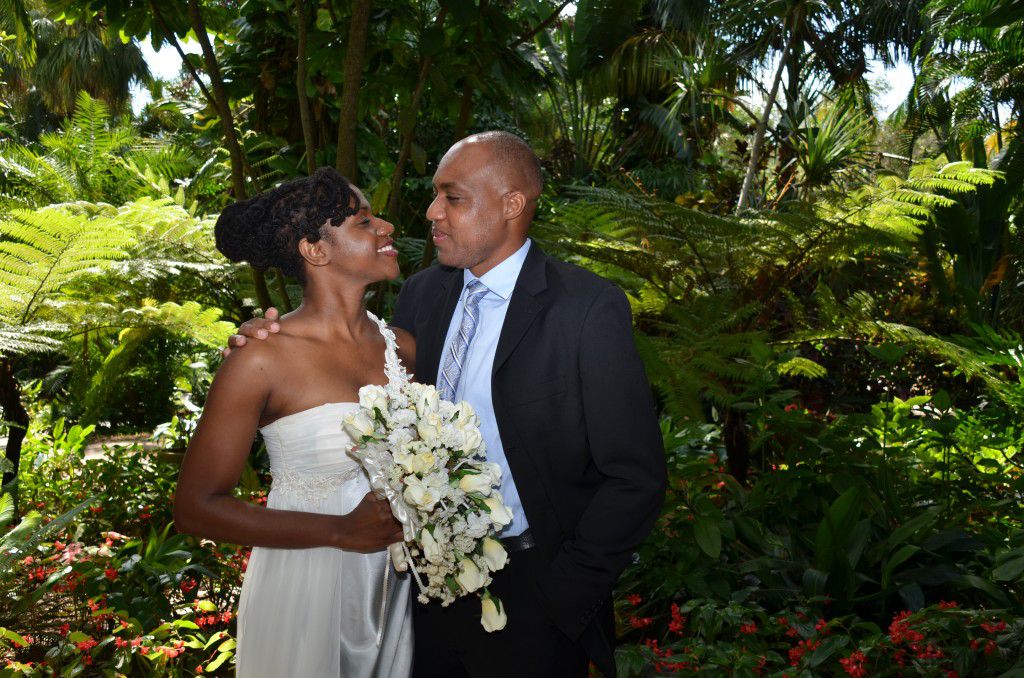 Florida weddings don’t have to be at the beach to be romantic. Photos by George Sr.

It was a beautiful day for a simple Sunken Gardens wedding ceremony. Although Warren & Larissa weren’t having a reception, the Sunken Gardens does have function rooms for wedding with receptions. They also have chairs, electrical set up for music, and an arch for the outdoor garden weddings. Florida weddings don’t always have to be at the beach. Consider Sunken Gardens as a beautiful alternative with it’s romantic gardens.