Jeff & Gwen will be celebrating their 20th year wedding anniversary on July 9th. Jeff contacted me wanting to plan a surprise Treasure Island Beach Vow Renewal Ceremony while him and his family were on their vacation in Florida. Jeff, Gwen, & their three sons would be coming to Florida from Seattle and staying at Sunset Vista Resorts in Treasure Island. He was looking at our elopement packages and wanted to do package 3 for his surprise Treasure Island Beach vow renewal ceremony. Package 3, includes: ceremony officiant, photographer, & heart made with rose petals in the sand. In lieu notarizing and return of license, I offered a few roses as a bouquet for Gwen.

The surprise ceremony date was set for July 2 at sunset. Jeff corresponded with me on how they would pull off the surprise. On the day of the ceremony, I sent Jeff a text when George Sr. (photographer) and I arrived at the Treasure Island beach. Jeff was out with his wife, Gwen, & kids taking a walk on the beach. Jeff was awaiting my text. George Sr. and I were making the heart in the sand with the rose petals and preparing the final touches on it. 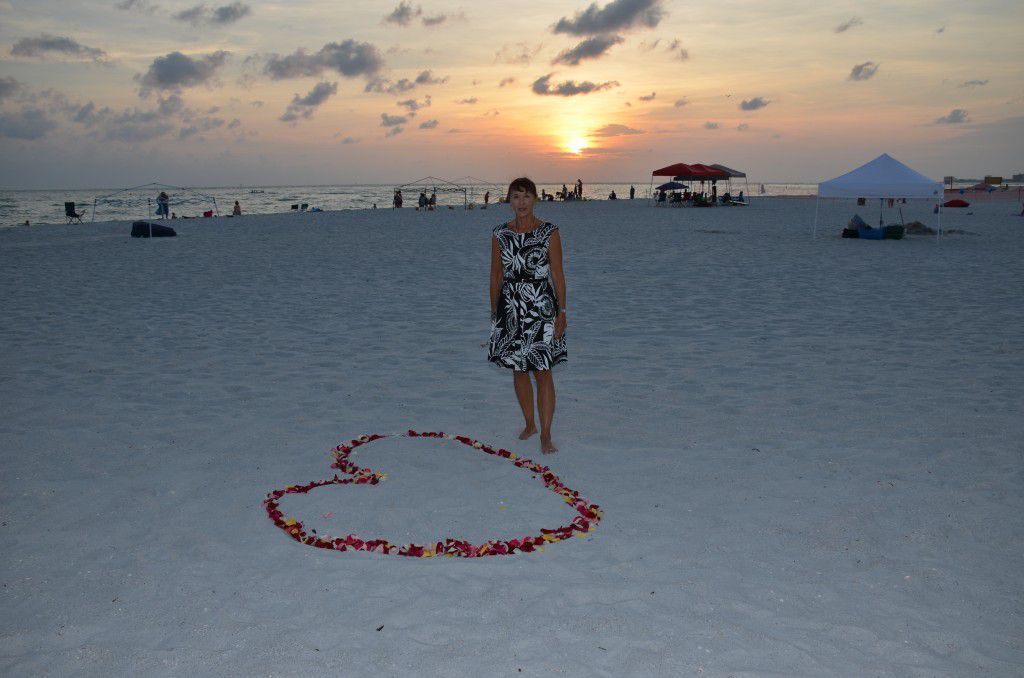 Heart in the sand ready and awaiting the couple. Photos by George Sr.

Jeff told me what he was wearing and said he would text as they got nearby the location for the ceremony. George Sr. and I, kept a watch for them and when we saw them, George went up to Jeff and asked him if he would take a photo of him & me. Jeff was glad to 😉 George asked if Jeff and Gwen would just stand in the rose heart for a moment so he could see just where he wanted us to stand for the photo. So we had Jeff & Gwen centered in the rose petal heart. Once they were in the heart I went up to Gwen and asked if she was Gwen Loosemore.When she said ‘yes’ I said, “A secret admirer shared with me a special occasion that you are going to be celebrating. That admirer asked me to celebrate your 20th year wedding anniversary and perform a vow renewal ceremony.” She turned around and Jeff was on one knee kissing her hand. 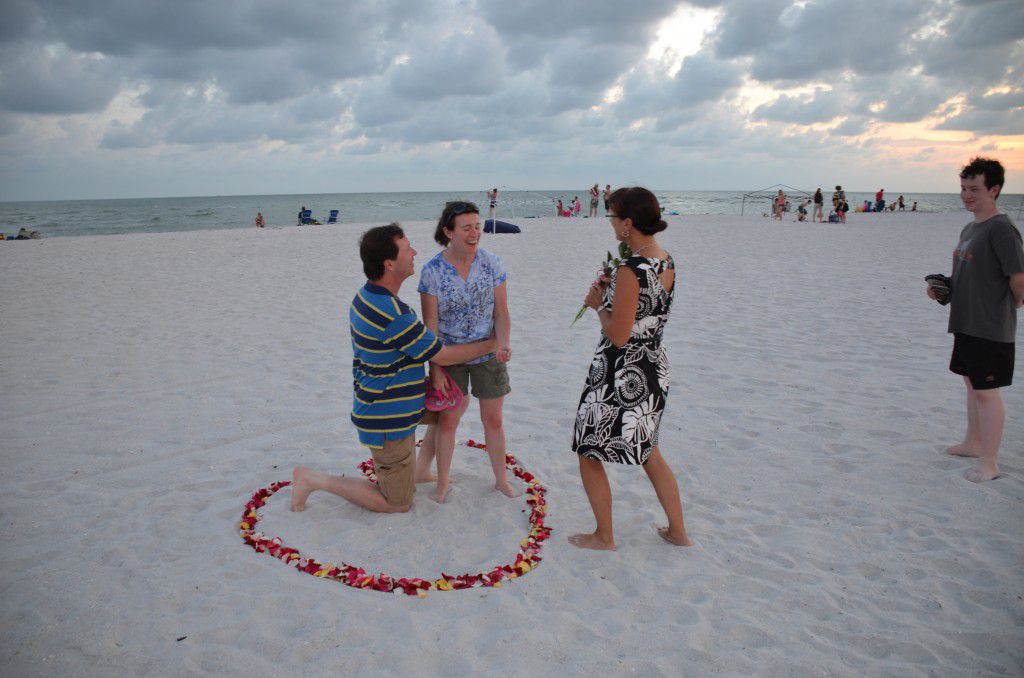 We sure did surprise her! Photos by George Sr.

She was stunned!!! She had a handful of shells that she had been collecting on the beach and was totally lost for words. Her first reaction was, “Who are you guys??” We had a few chuckles then proceeded with a beautiful vow renewal ceremony. She wanted her three boys together with them during the ceremony. Her oldest son held a gift that Jeff had for her. It was a beautiful pearl necklace that Jeff presented to her during the ceremony. 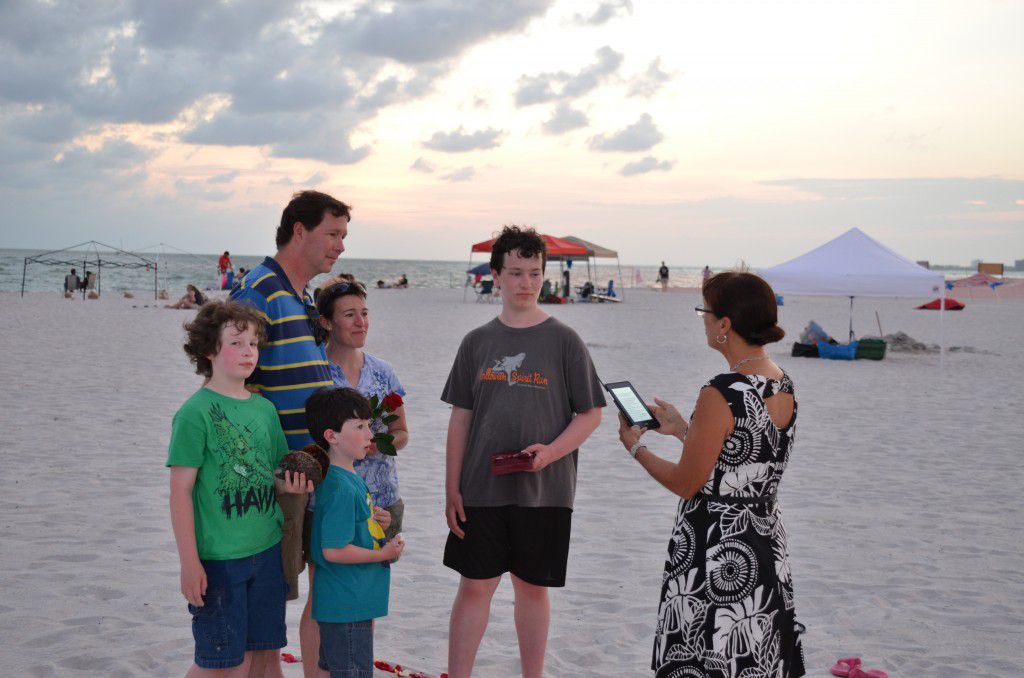 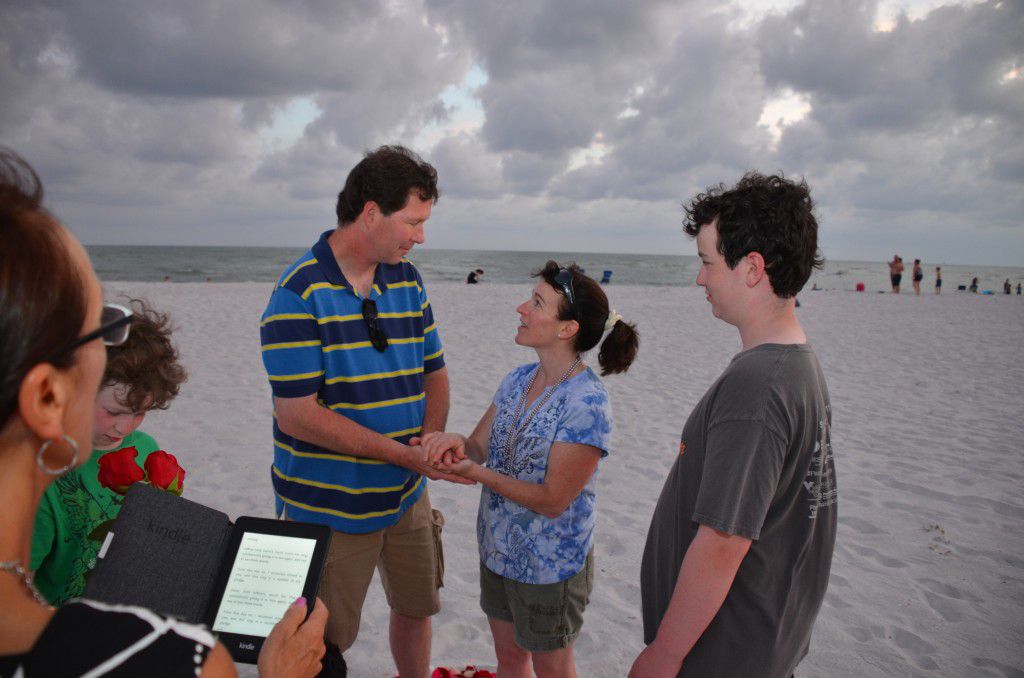 At the end of their ceremony we were able to just catch the sunset. A beautiful ceremony, a beautiful couple, and a beautiful family just as happy and in love today as they were 20 years ago. 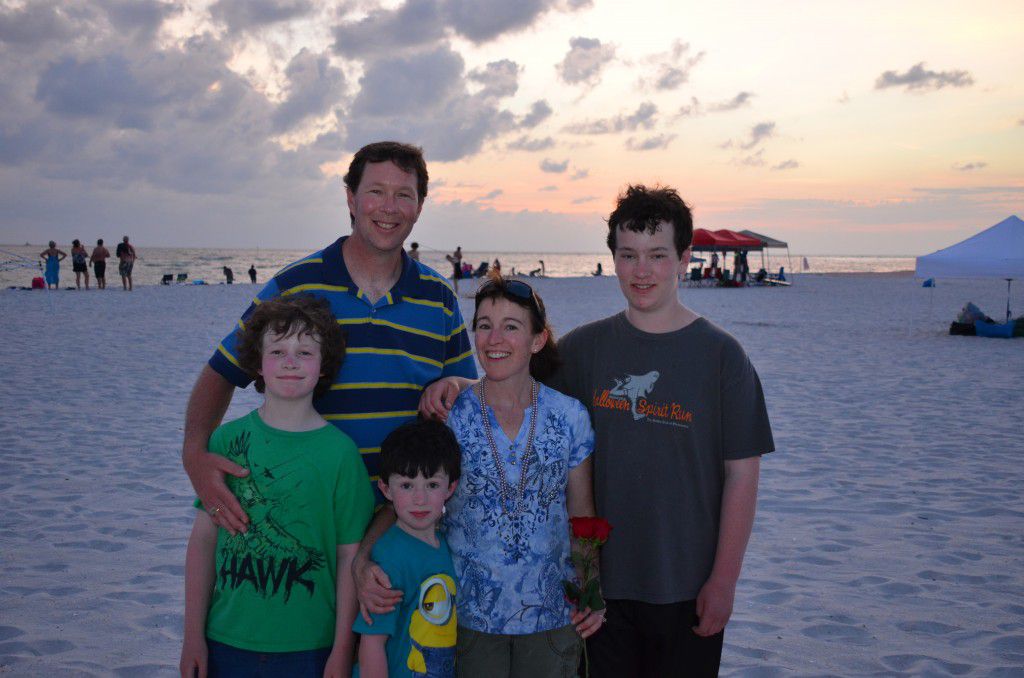 Cheers to another 20 years of happy marriage!