I was contacted by Vicky, Mother of the bride, and asked to officiate her daughter’s St. Petersburg Beach wedding. Her daughter, Jaclyn, and soon to be son-in-law,  Nicholas, were having their wedding at The Lions’s Club on St Petersburg Beach. Jaclyn and Nicholas have three small children and Vicky was doing all she could to help plan their St. Petersburg Beach wedding on a budget. When she spoke to me she discussed the budget. Vicky wasn’t sure if hiring me as their Rehearsal Director would fit in the budget. I really want to help people and make everything workout for them so I offered to send her my Rehearsal Guide at no charge and suggested to Vicky that she conduct the rehearsal herself following the guide in order to save some money. I also offered to go over everything on the phone with her prior to the rehearsal. She was VERY thankful that I suggested and offered to do this for her.  After the rehearsal, Vicky email me “Your rehearsal documents were very helpful!  Thank you very much!”

The wedding was held outside on St. Petersburg Beach.  The bridesmaids wore knee length teal blue dresses and groomsmen wore white slacks with teal shirts & white ties. They got the bridesmaid dresses at David’s Bridal. Jaclyn and Nicholas’ three year old twin boys wore white suites, as well as their their one year old son. They looked adorable! The groomsmen were helping get everything together. But there was a table for the sand ceremony and they didn’t know where to put it so I showed them where to place the table. I also explained how Jaclyn and Nicholas would be guided to the table when it was time for the sand ceremony. They appreciated me helping them as they had no idea where to put it.  A bridesmaid was reading the sand ceremony. Charmaine got with her and also guided her on performing the sand ceremony. Jaclyn looked stunning as she walked down the isle to Nicholas. The tears started as soon as they they began to read their vows to each other. “I will love you when I’m 80 and still going strong,” Jaclyn said to Nicholas. They were both so tearful and happy that I had them give each other a hug before continuing on with the ceremony.

After the ceremony the reception was held in the club house. It was a beach theme. The cake was a beach cake made at Publix with starfish, colorful shells, and frosted with sea decorations. In front of the cake they had placed brown sugar to look like sand. 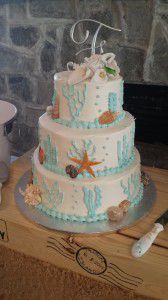 There was also a treat table with all kinds of sweet candies in bowls and plate along with a cute sign that read “Love is sweet take a treat”. Everything was so nicely coordinated. 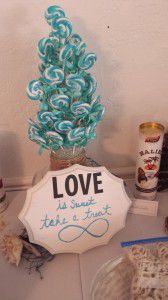 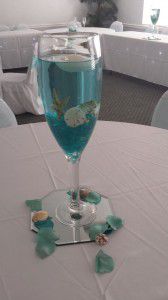 After the wedding I was complimented on the ceremony and thanked for helping make their St. Petersburg Beach Wedding on a Budget happen with ease.