Nicole contacted me in March about performing her destination Treasure Island Beach wedding in June. Nicole and her family live in Minnesota and wanted a Florida beach wedding.

Nicole and Rob, her now husband, have four children (two boys and two girls) and wanted them to participate in the wedding. Nicole was thinking about a morning wedding so they could enjoy the rest of the day at the beach. Nicole didn’t know where to start with planning her Treasure Island Beach wedding from a distance and had a ton of questions for me. They were going to be staying at the Tahitian Beach Motel on Treasure Island and wanted to know if she needed a permit to have a ceremony on the beach. She wanted to know where to get her marriage license, as well as, if we had a table to do a sand ceremony. They wanted to keep it simple, but did want ceremony music and a photographer. Nicole & Rob’s parents  and their children would be the only guest attending. Nicole was so pleased after a few e-mails with me that all her questions were answered and everything she wanted was going to happen. I was able to provide her with a table, photographer, and ceremony music!! She sent me an email saying  “Thank you soooooo much our dream is coming true finally.”

When Nicole arrived in Florida she immediately started collecting shells on the beach to make boutonnieres for the boys and bouquets for the girls. 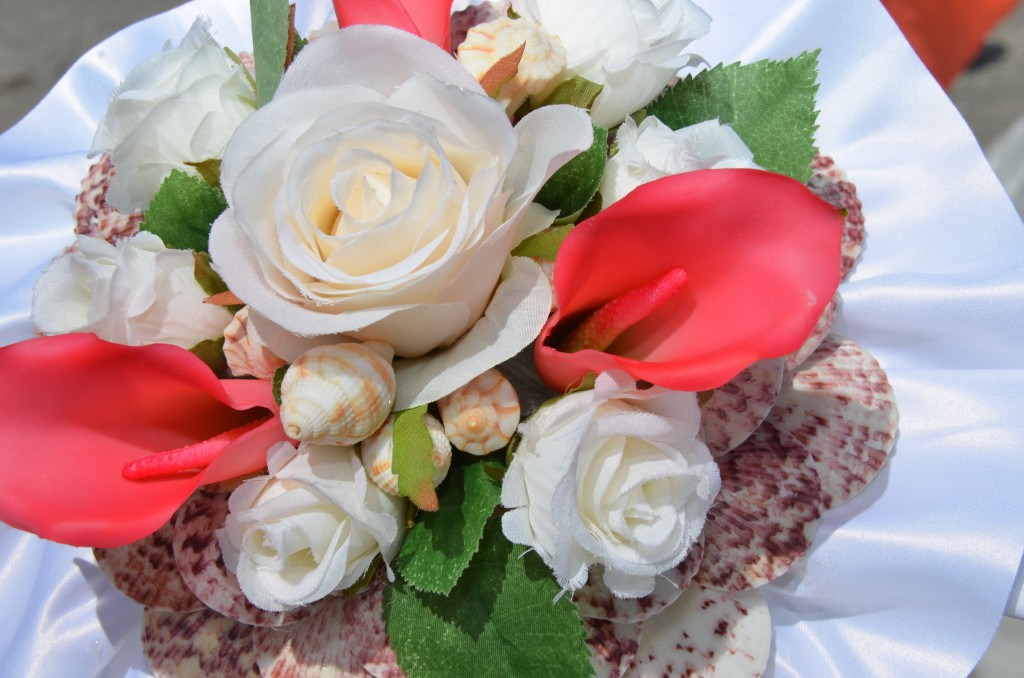 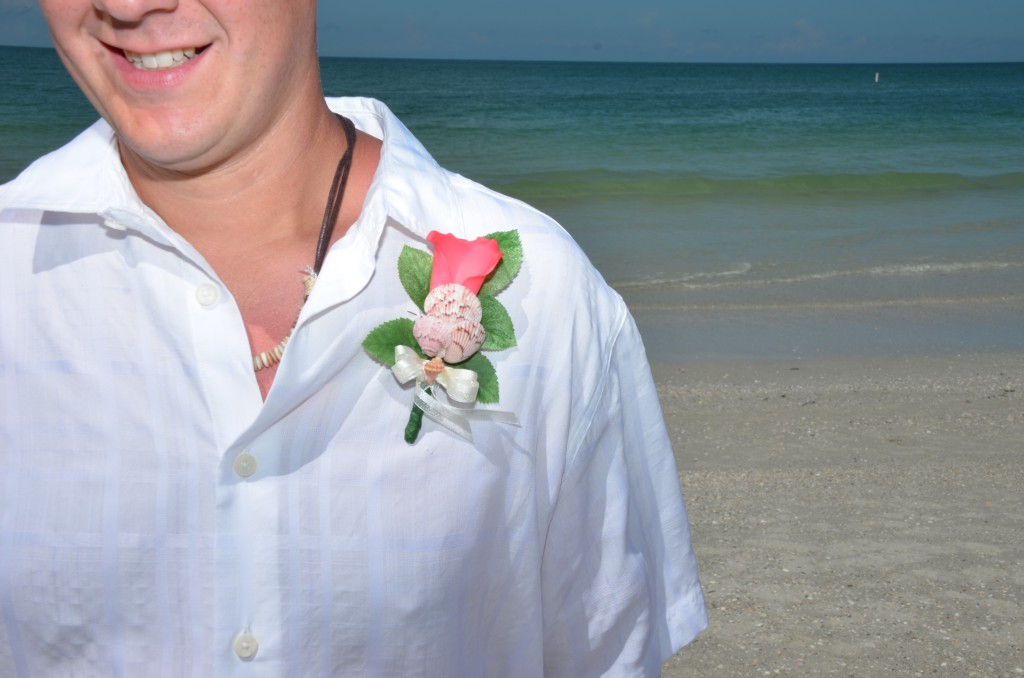 As you can see from the pictures, Nicole is very creative. She also made foot jewelry for the girls. She got her dress at a 2nd hand store and did the alterations herself to make it into a beautiful beach wedding dress. She got her supplies and sand ceremony kit at Michael’s crafts store. 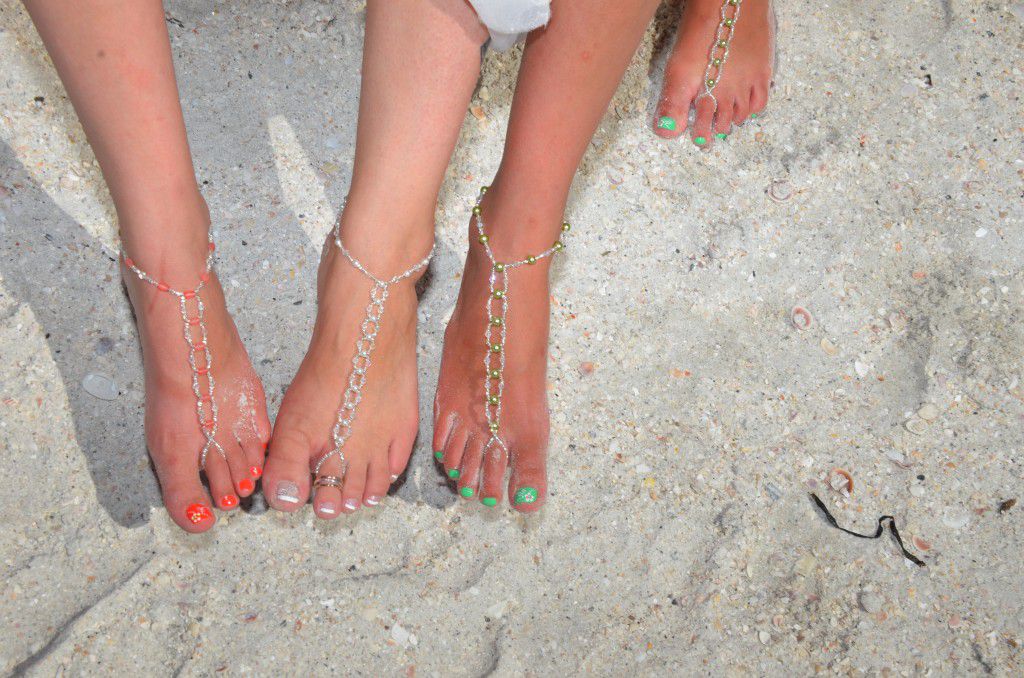 On Wednesday, June 18th, George Sr. and I met Rob at the Tahitian Beach Motel. The weather was beautiful and not too hot. The ceremony was at 10:00 AM. We found a beautiful spot on the beach for the ceremony. Rob was pinning boutonnieres on the two boys and I setup the sand ceremony table.

Nicole looked beautiful. George Sr., photographer, was able to play music from his i-pod for the ceremony. Nicole’s oldest son walked her down the beach “isle”. ‘Will you Marry Me,’ by Jason Derulo was the song they walked to. 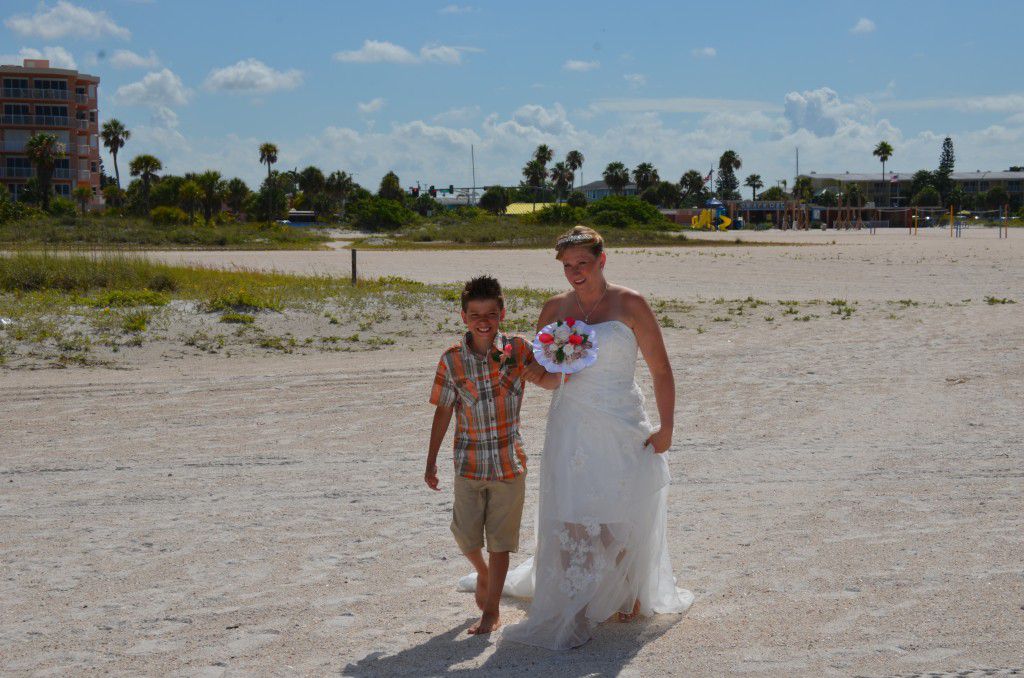 For the sand ceremony, Nicole, Rob, and the children (Kassie, Bailey, Alex, and Jack) all simultaneously poured different colors of sand into a frame. While the sand was being poured ‘All of Me,’ by John Legend was playing. It was so beautiful. The parents had tears in their eyes. 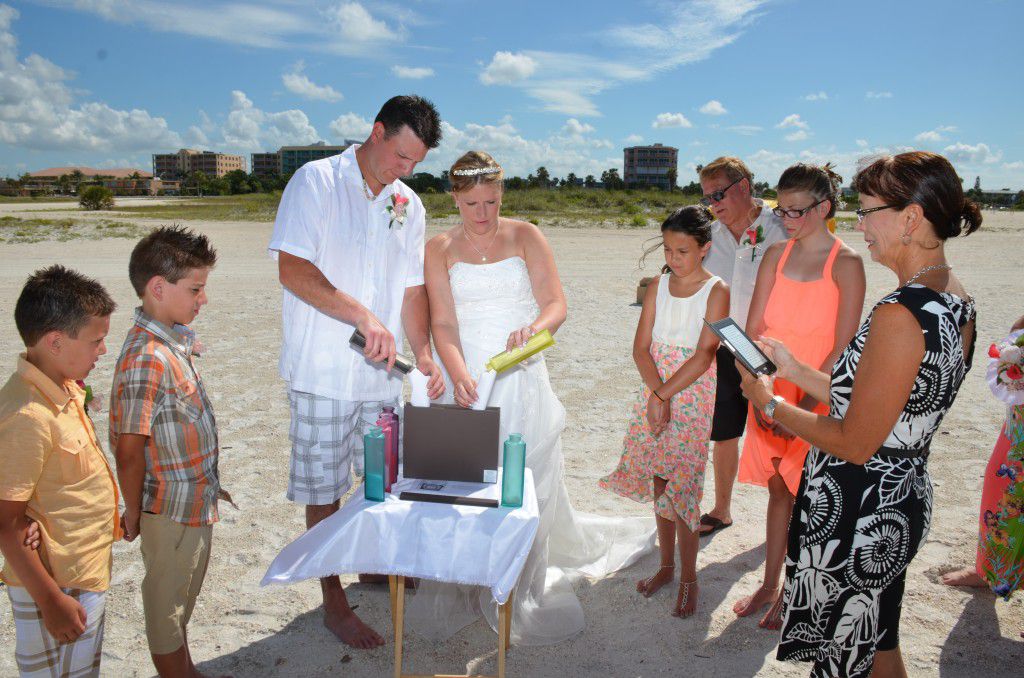 Nicole & Rob were extremely pleased with the ceremony and our services. It was exactly what Nicole had always wanted and they all thanked George Sr. and I repeatedly…then quickly ran off to change and enjoy a fun family beach day.