Luis contacted me asking about a package for his upcoming 25 year wedding anniversary. His wife Dina Maria had wanted to do a vow renewal and he decided that he wanted to surprise her and put it all together. I suggested Sand Key Park. He wanted me to meet him at the park so he could get an idea on just how it would be played out, see the location, and talk to me about the details. When we met he told me he would be flying in all the family from New York. He said there would be about 25 people including the grandchildren. He asked for restaurant suggestions and hotels in the area. He was very pleased and booked a package for Saturday, January 24th. He wanted an arbor with white and some burgundy color fabric. He said those were the colors they had when they were married. George Sr would be doing photos, and he wanted some white folding chairs. He also wanted a rose petal runner in between the chairs leading to the arbor.

I was amazed how well he was able to coordinate this event with me. I hardly heard from him until a week before. He had all the details on when family members would be arriving and just wanted to know backup plan in event of rain.

On Saturday it didn’t rain. It was just COLD!!! The ceremony was at 5PM. It was windy and about 50 degrees. 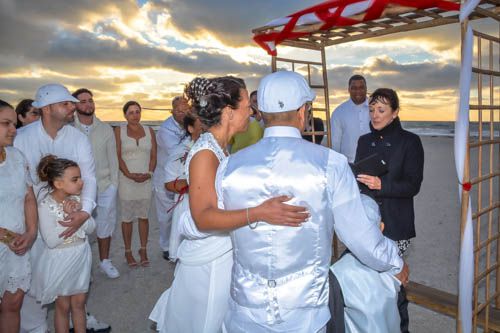 The girls had been together all day and he was going to have them meet him and the others at the beach. They were going to have a family get together. His plan was to have the grandchildren jump out and meet his Dina Maria at the car and just escort her unknowingly why down to the beach where the ceremony would take place. They handed Dina Maria a bouquet of flowers and escorted her down the beach. She had some suspicions, but didn’t know just what was going on. While waiting Luis said they had many fights over him hiding in different rooms and making sneaky phone calls putting this together. He did a great job. Her grandchildren walked her down to Luis and I opened the ceremony saying, “A special admirer asked me to be hear with you and your family to celebrate a special occasion that you will be celebrating on Tuesday (actually anniversary day) and to perform a vow renewal ceremony celebrating your 25th wedding anniversary.” She became tearful. I commenced with the ceremony. It was so cold she was shivering. I could see them look at each other and reflecting back on their years of marriage. Luis had gotten them each new rings that they placed on each other during the ceremony. They have three grown beautiful children, two boys and one girl, and a number of grandchildren. It was so fun to see all the family how close they were and all happy to be there to celebrate this wonderful event.  After ceremony George Sr. took photos of them and the family. Luis repeatedly thanked me for a wonderful ceremony. 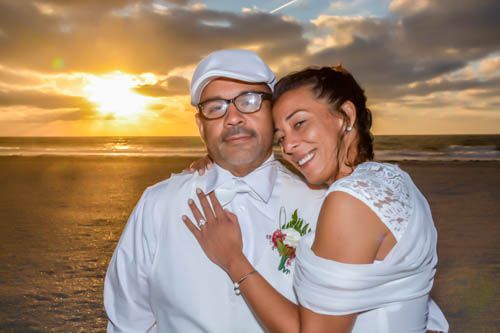 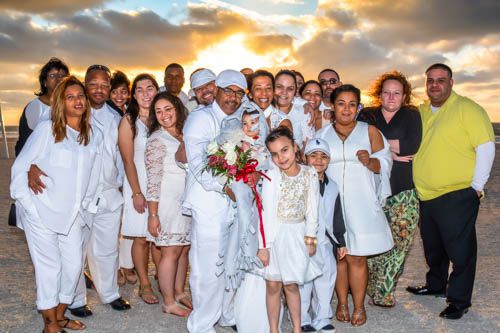