Doug contacted me to officiate his wedding at Powell Crosley Estate in Sarasota on June 21, 2014. Doug & Susie wanted to meet me beforehand, and I  enjoy getting to know the couples I’m going to marry, so I agreed to meet with them. One of the first words Doug said to me was that he wanted an officiant who was professional; which I most certainly aim to be! I had a lot in common with Doug and Susie, for example, they live in Tallahassee and that’s why my daughter and son-in-law live, they are Florida State University fans and so am I, and Susie got her dress at Brides Against Breast Cancer and that’s where we got my daughter’s wedding dress from. So needless to say, I knew we’d get along and have a fun time with their wedding ceremony.

Susie & Doug met through a friend in October 2010. They were playing a game of Domino’s and Susie was paired up with a friend playing against Doug. His team won the game. As she was leaving he asked her out and that’s how it all began. In April 2013, Susie was preparing everything for a beautiful Sunday morning picnic at Lake Ella in Tallahassee where they live. She was rushing around then out-of-no-where Doug grabbed Susie’s hand and got down on one knee & proposed to her.

They decided to have their wedding at Powell Crosley Estate in Sarasotaon on June 21, 2014. Susie has a lot of relatives in Miami and Doug’s family would be traveling from Tallahassee so they wanted the wedding to be at a location half-way for both families.

The front of the Powell Crosley Estate in Sarasota

The beautiful Powell Crosley Estate is a historic Mediterranean Revival mansion called “Seagate” overlooking Sarasota Bay. The day of their wedding was gorgeous!! A light breeze was flowing, not a cloud in the sky, and the water was just sparkling blue. The ceremony was outside in front of the Carriage House. 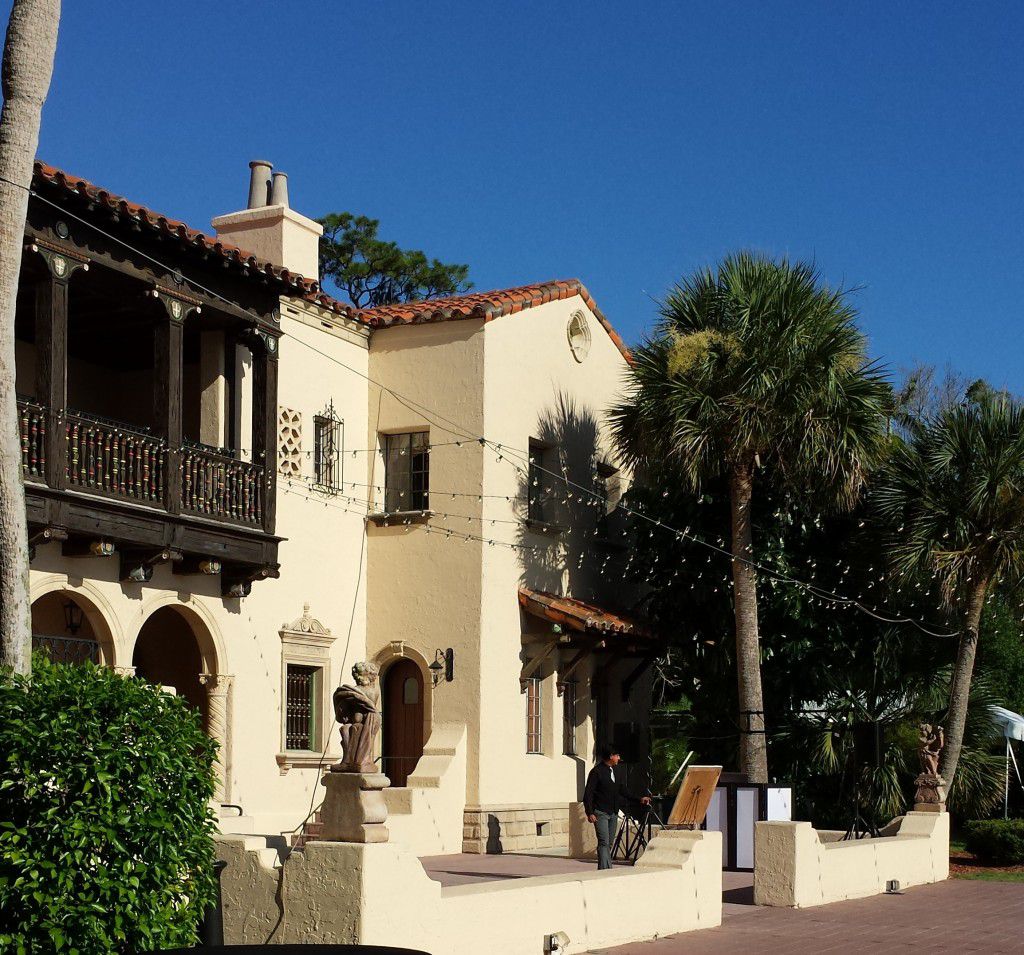 Getting ready for the ceremony

LaLucha, a three-piece band, played the outside music for the ceremony. I performed the ceremony in English and a friend translated it in Spanish. There were three bridesmaids wearing knee length black with gold dresses & three groomsmen in the wedding party. Susie looked elegant as she walked down the aisle. Susie got her beautiful dress at Brides Against Breast Cancer. Doug looked so handsome in his white tux and black tie. 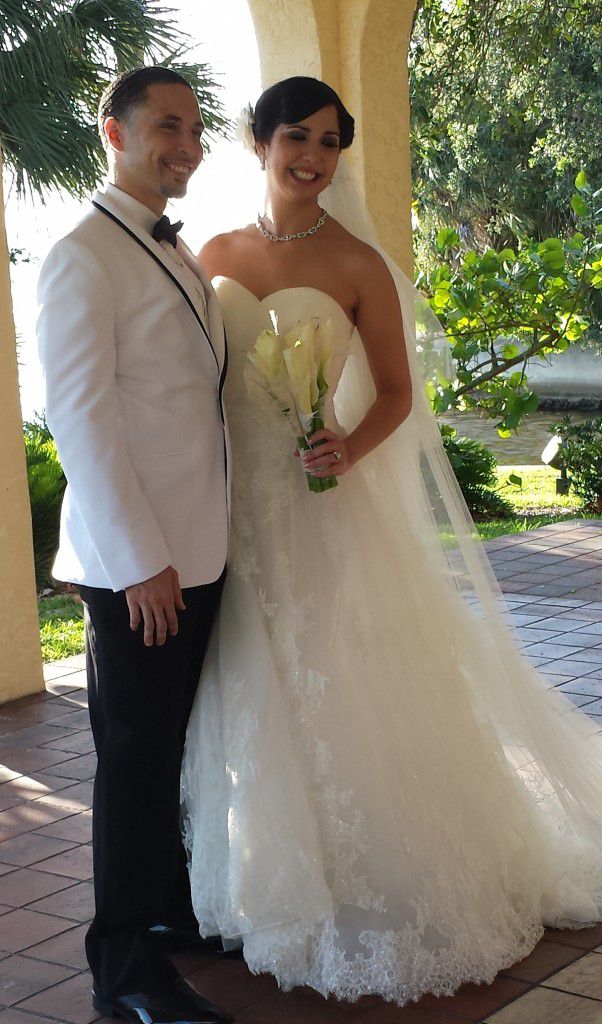 The lovely bride and groom

The tables were set up outside with gold table cloths and floral centerpieces for the dinner reception. Kimberly Hensley with Kimberly Hensley Events was the coordinator. She did a fabulous job setting up the tables and coordinating the ceremony. 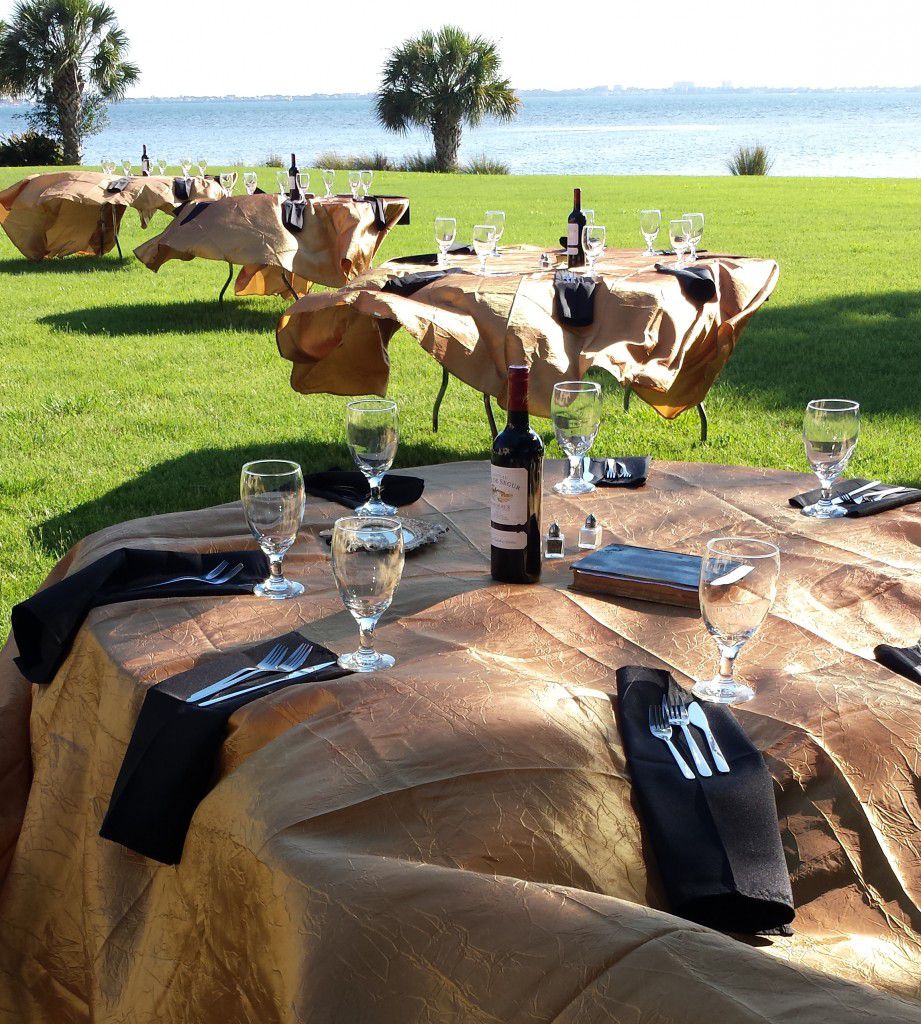 After the ceremony, Doug & Susie thanked me and said how much they appreciated everything I did for them. This was a beautiful day and I was happy to be a part of their lovely ceremony. Best wishes, Doug and Susie!!

Shout out to the fabulous vendors whom helped make Doug and Susie’s wedding at Powell Crosley Estate in Sarasota a huge success: