Christopher corresponded with me in preparing the ceremony and I helped him with a number of  questions and concerns. A week before the ceremony he e-mailed me asking if I thought he should switch the time from 4 pm to closer to sunset. He was concerned that it would be too hot at 4 pm. Not being from Florida that hadn’t been a concern of his when he started planning the wedding. I let him know that their ceremony wasn’t that long and suggested that they have some paper fans and perhaps a bucket with cold bottled water for guest if he was concerned about the heat. He decided to keep the time at 4 pm and fortunately he did, because we had heavy thunderstorms shortly after the wedding ceremony. Ellida, my associate, preformed their Ana Maria Island destination wedding ceremony and note that they actually had a nice breeze under the trees where the wedding was.

The wedding party arrived in a limo provided by Longboat Limousine.  The best man, Paul, escorted the mothers and then walked down with the Maid of Honor, Jennifer.  The ring bearer was their 10 year old son, Jackson. Megan was a beautiful bride. She carried a gorgeous bouquet of white and pink flowers and looked stunning.  Guitar music played before, during, and after the ceremony. Christopher and Meghan were very emotional during the ceremony. It was a beautiful wedding.

Christopher e-mailed me on Monday saying:  “Thank you, Charmaine. Ellida was great. Thanks for all the help and advice, it was a relief to come to trust someone as a source of good information, and I’m glad we found you.” 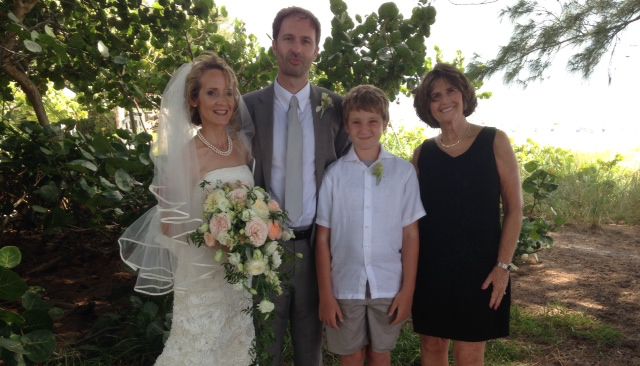 Ellida with Christoper, Megan, and Jackson at the Ana Maria Island Destination Wedding.