Coquina Beach is a little hidden gem spot for a wedding. Coquina beach has the clearest water, and it is just beautiful. Their is path leading to the beach from the parking lot that brings you out to gorgeous beach with white sand. The nicest thing about it is no swimming is allowed because of the current. It makes it a beautiful spot for a beach wedding, and has amazing sunsets.

We were a part an amazing surprise Coquina Beach wedding ceremony on August 11th.

Lellani called me on Monday ,August 7th and asked if I would be available to officiate a surprise Coquina Beach wedding ceremony on Friday,  August 11 at sunset. Lellani,  her fiance Mario, and their two children were vacationing from Miami  and wanted to get married.  She booked our Tampa wedding package #4  .

On Friday when George Sr and I arrived we found out then that it was going to be a surprise wedding for the children. Lellani told the children they would be going to the beach to have family photos taken. The children were the only guests. They were totally clueless that their parents were getting married. They were asking what the bottles were that I was setting up for the sand ceremony, and I just told them it was part of the background for the pictures. When we were all setup and ready to start the ceremony Lellani walked back away from the setup and we started to play the wedding song for Lellani to walk down the aisle. That’s when the oldest child said, “Gee it’s like your getting married or something.” Lellani and Mario replied, “We Are!” The children were so so excited!!! They said, “For real?!” They actually had tears of joy in their eyes. They had been asking their parents when they were going to get married and were never given an answer. The children seriously watched the ceremony and loved every minute of it.

It was a gorgeous sunset. Lellani, George Sr took photos of ceremony, and family photos. Lellani and Mario thanked us so much for such a wonderful ceremony, and all we did to help with their Surprise Coquina Beach wedding ceremony. 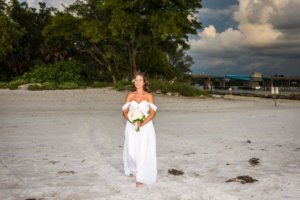 Lellani walking down the aisle. 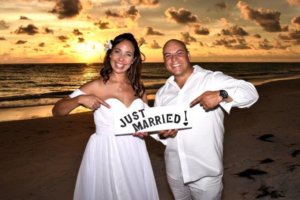 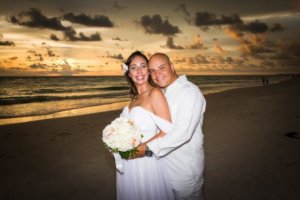 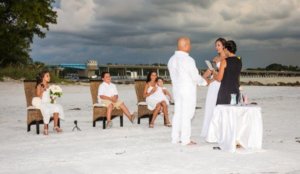 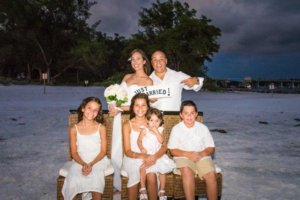 Lellani, Mario and family so happy after the wedding. 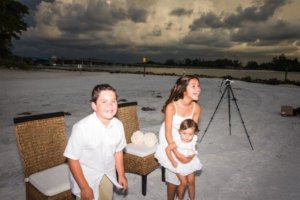 Capturing the moment when children found out about the wedding