Sunrise or very early morning is the nicest time of day for a beach wedding in the Florida Summer. Also if you want a quiet, peaceful atmosphere for your summertime wedding ceremony morning is by far the nicest time for just that. Summers in Florida get very hot and humid as the day goes on. In the morning it isn’t as hot and humid making it so much more comfortable thus why we highly recommend summertime morning wedding ceremonies.

A Beautiful Wedding in Florida had a beautiful sunrise vow renewal ceremony on Sunday for Brenda and Kenneth. We were the first and only ones on the beach at Sand Key Park in Clearwater at 7:00 AM. George Sr and I made a fresh rose petal heart in the sand and George SR took photos. Brenda and Kenneth were celebrating their 25th year wedding anniversary on that day. They were vacationing in Florida from Missouri. Brenda and Kenneth chose to commemorate their ceremony with the giving and receiving of communion recognizing their spiritual commitment and showing their participation in the body of Christ. The quiet ambiance at the beach allowed us to just listen to the waves of the ocean and have a very undisturbed vow renewal ceremony.

Immediately following Brenda and Kenneth’s vow renewal ceremony, we had a wedding ceremony at 9:00 AM on Honeymoon Island in Dunedin. George Sr. and I met Hope and Wendy at the beach before the beach crowds started to arrive. We setup the arbor on the white sand where no beach goers had arrived yet then had a lovely wedding ceremony. Hope and Wendy chose to participate in a unity sand ceremony with pink and purple sands to be blended.

Quite often summertime morning wedding ceremonies or sunrise ceremonies are celebrated without guests but guests are not excluded. After the wedding ceremony you can have a celebrotary reception brunch or beach day. We always say “It’s your day” have fun with it. 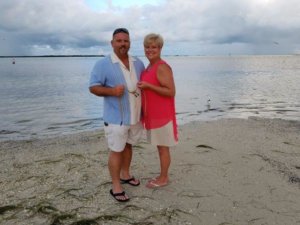 Bonenita and Jody at Honeymoon Island on July 22. Sunrise ceremony. They tied the fishermen’s knot!! 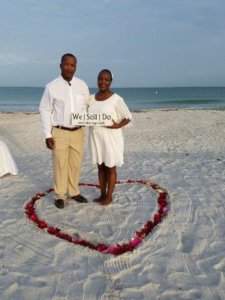 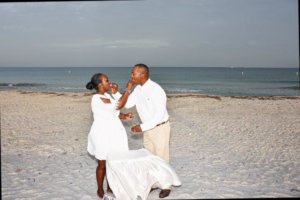 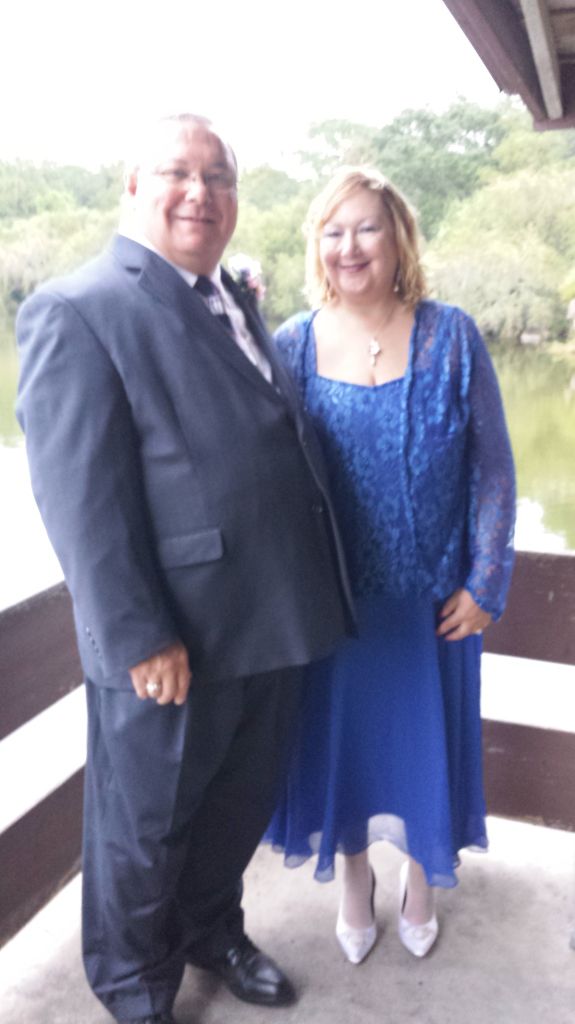 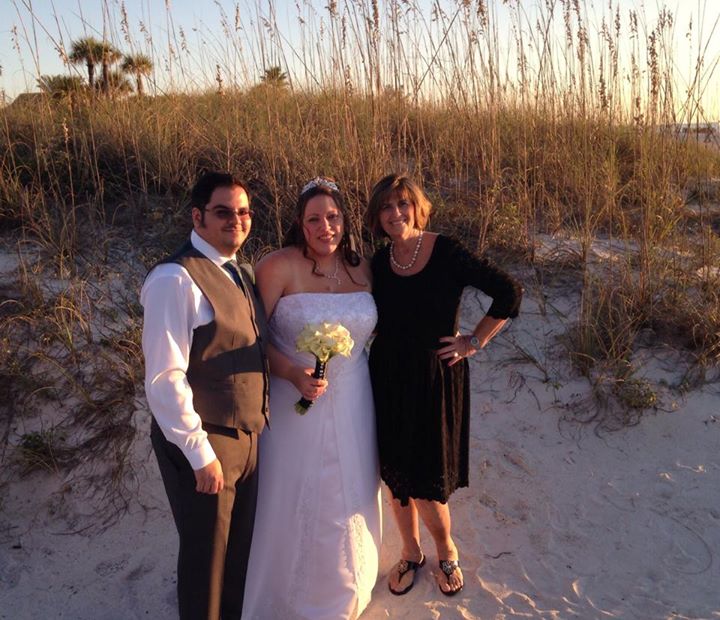 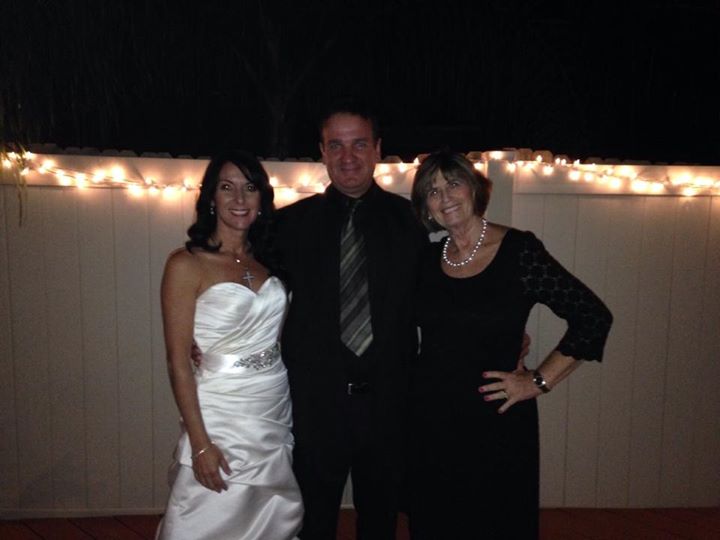 Last Saturday night, I officiated Nichole and Rick’s Clearwater Beach wedding. The wedding and reception was held at the Clearwater Recreational Center. They had a Hawaiian theme for the wedding. Guest were greeted by Hawaiian’s in costume giving everyone a flowered lei to wear and a shell that would be tossed in the ocean at the end of the ceremony. 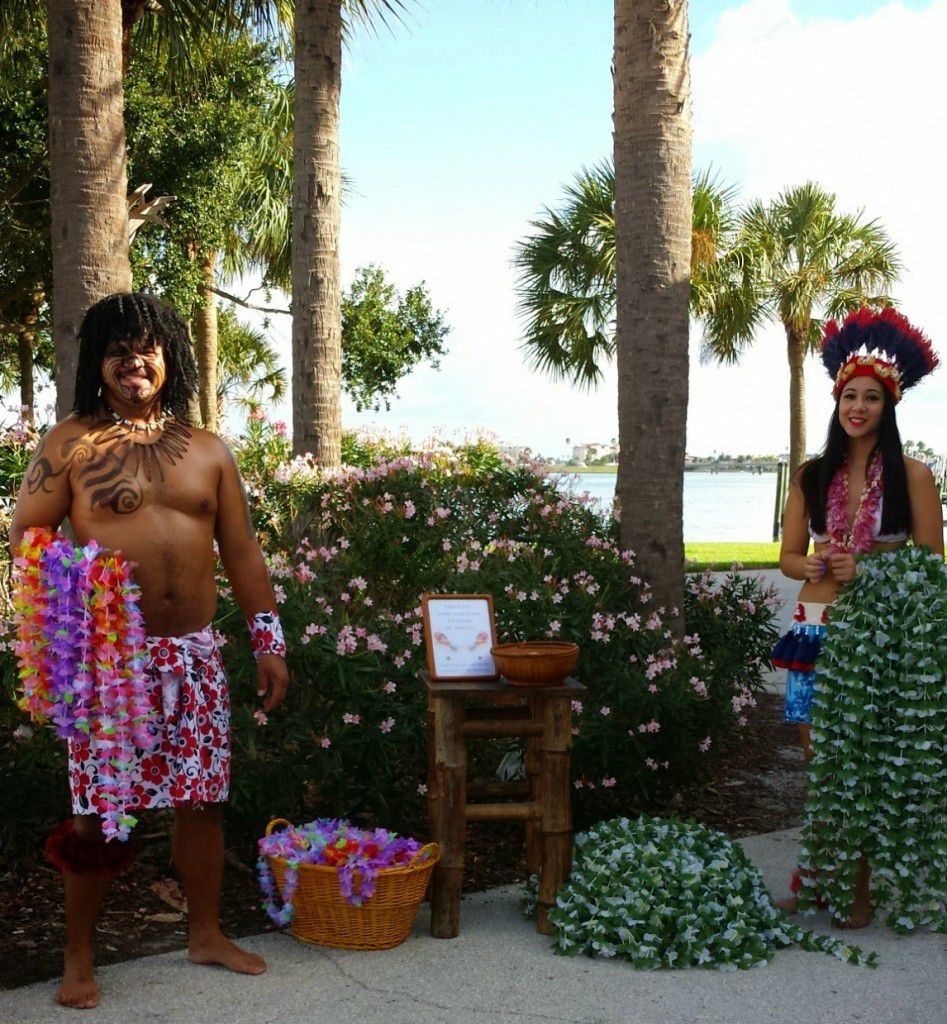 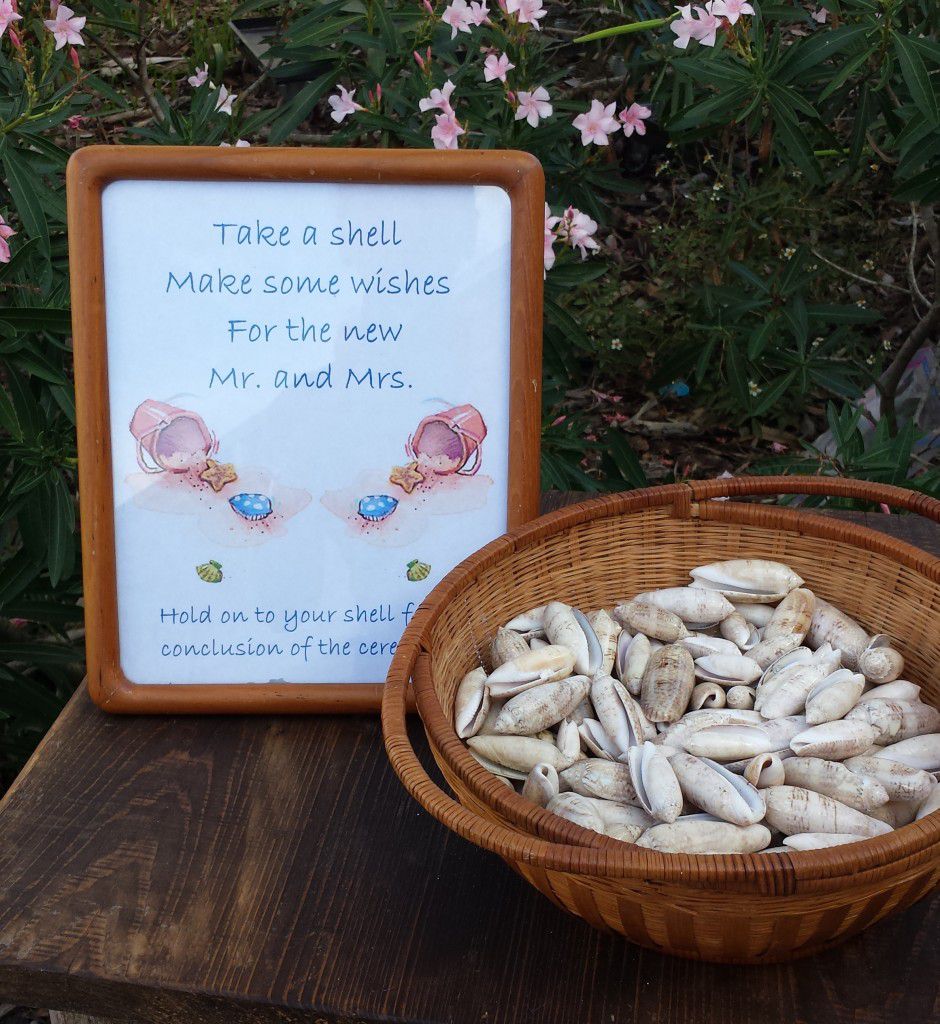 For the shell toss I said, “On the count of 3 we will all toss our shells into the water & as the ripples touch & intertwine with one another may our love & best wishes also join together for Nicole & Rick.” “Ready 1-2-3- TOSS!”

The wedding was outside on the lawn facing the gulf. They had over 100 guests in attendance. Weddings & Events by Suda coordinated the day of events. Suda had everyone lined up, and was very timely and organized. 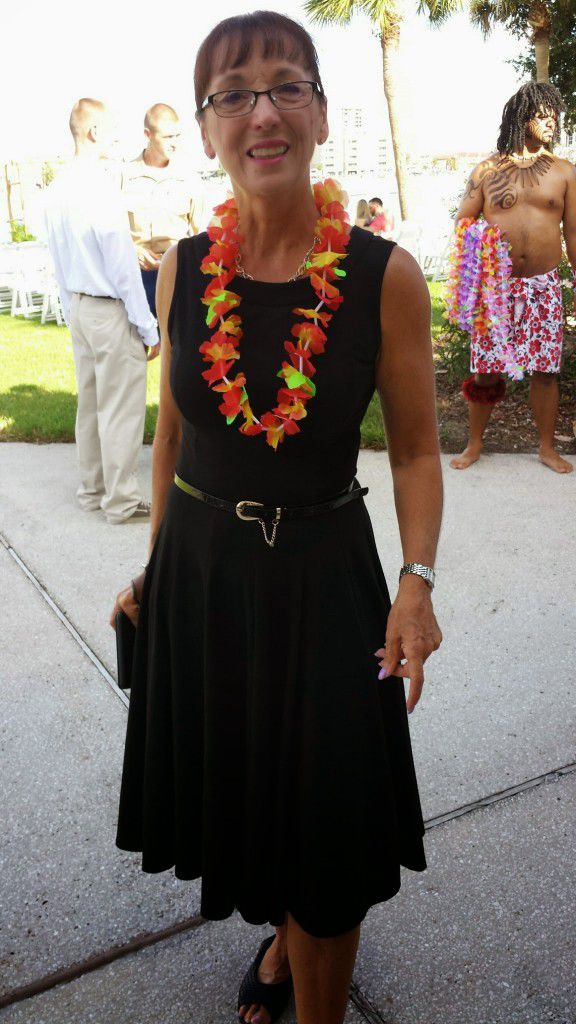 They even had me decorated with Hawaiian lei

Bridesmaids wore mint green dresses all knee length except for maid of honor who was wearing a gown. Groomsmen were comfortably dressed beige slacks, vest and ties. Nichole looked so beautiful. She wore a strapless off the shoulders white dress with a pretty pearl and jewel necklace that just accented her neckline and bead work on front of her dress. They all got their dresses at David’s Bridal.  Nichole had a Hawaiian version of here comes the bride played as she walked down the aisle. She was given away by her parents. At the end of the ceremony the guest were asked to go to the water’s edge for the shell toss. Guest were asked to make a blessing and a wish for the happy couple. Then at count of three toss the shells into the ocean. 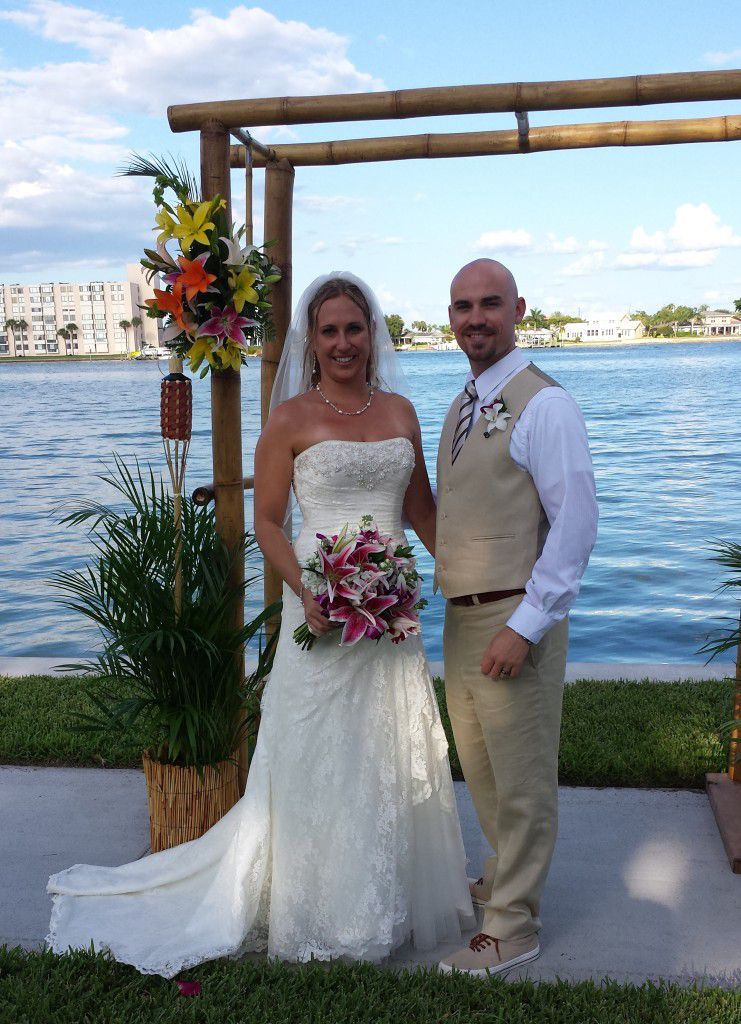 The reception was inside following the ceremony. Delectable’s Catering did the catering and  Chantilly’s cakes made a beautiful cake. 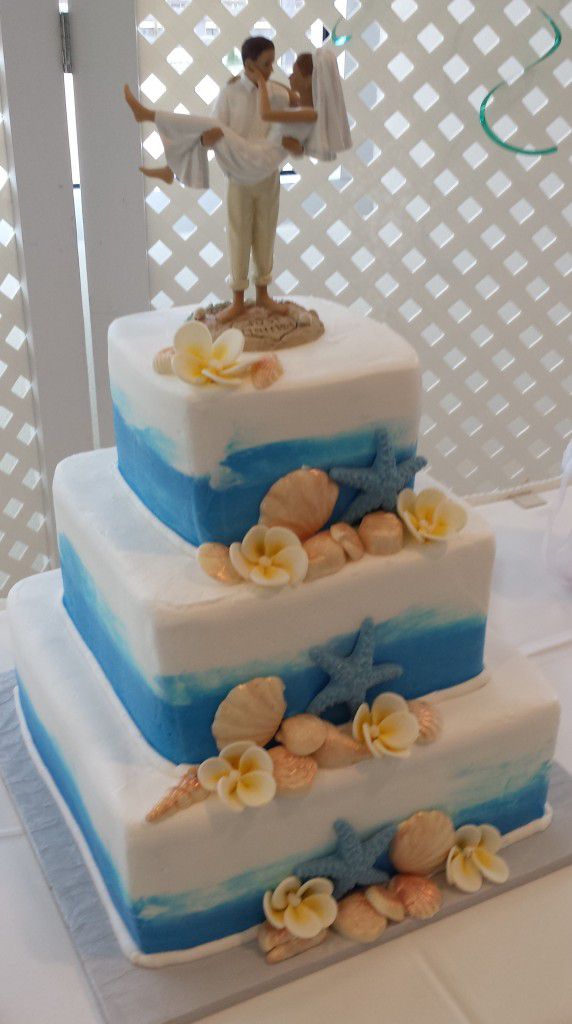 Rick and Nicole were very pleased and happy with everything. They weren’t going on a honeymoon just yet as they had out of town guest visiting. Nichole and Rick were a great couple,  I enjoyed performing ceremony and being a part of their special Clearwater Beach wedding. 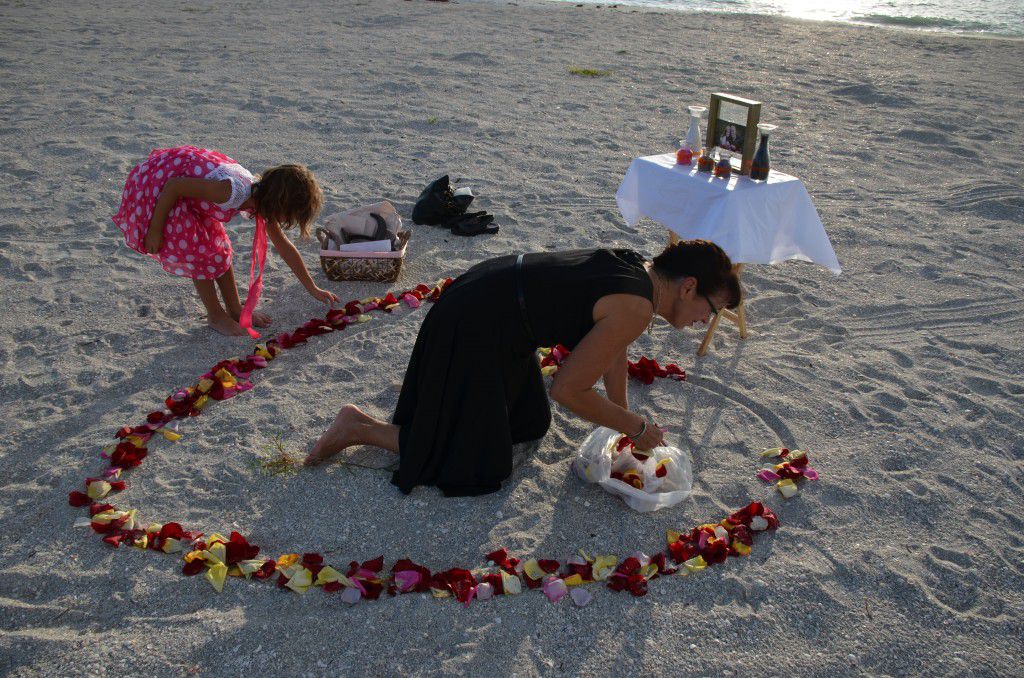 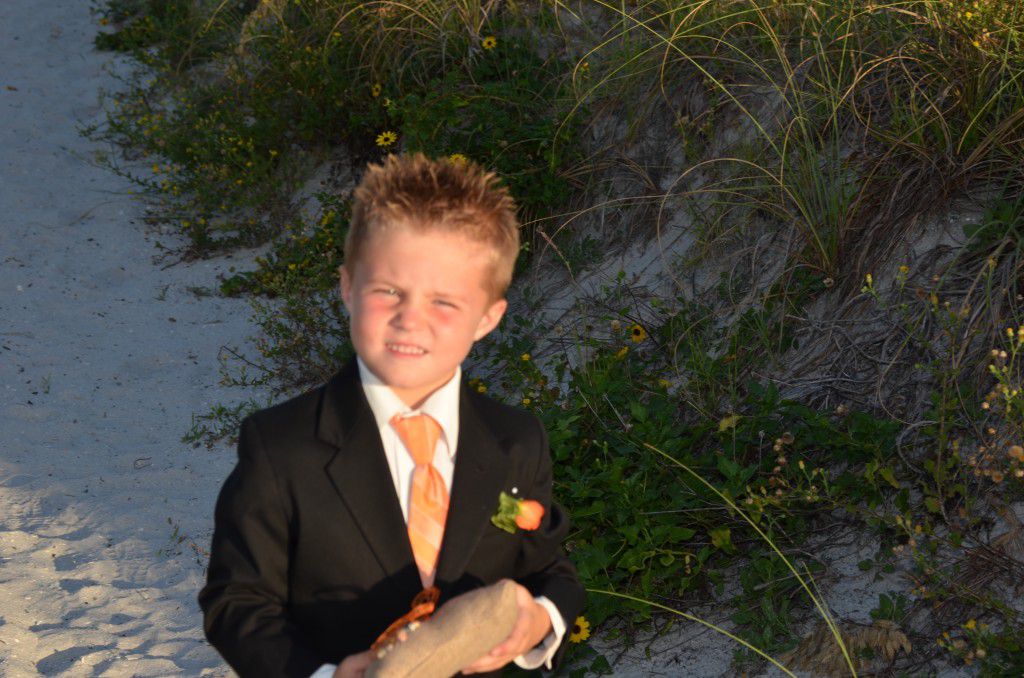 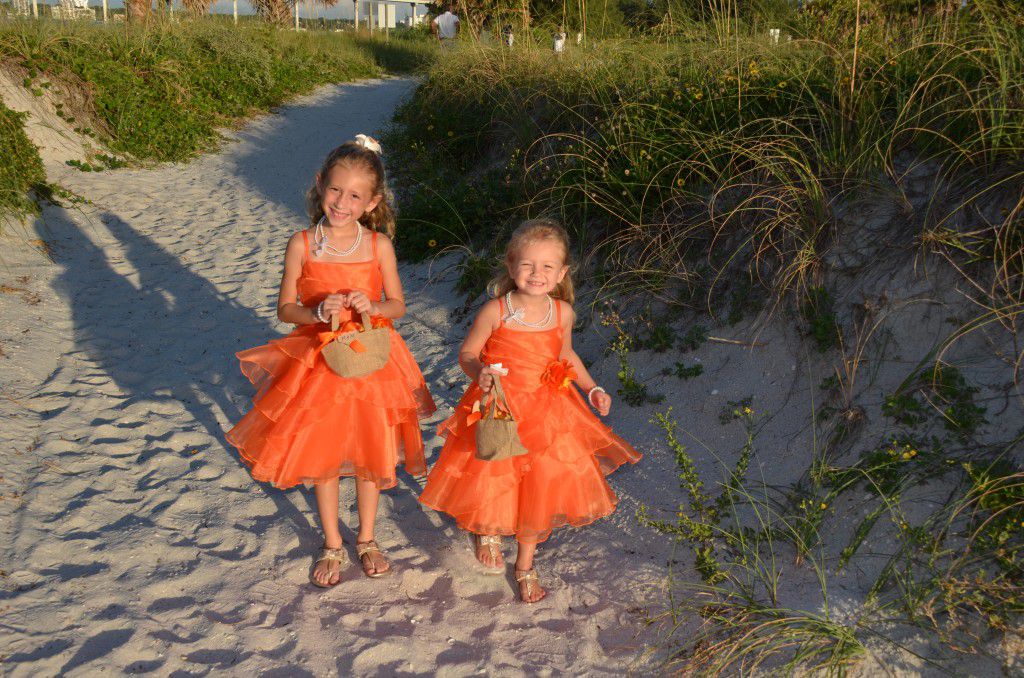 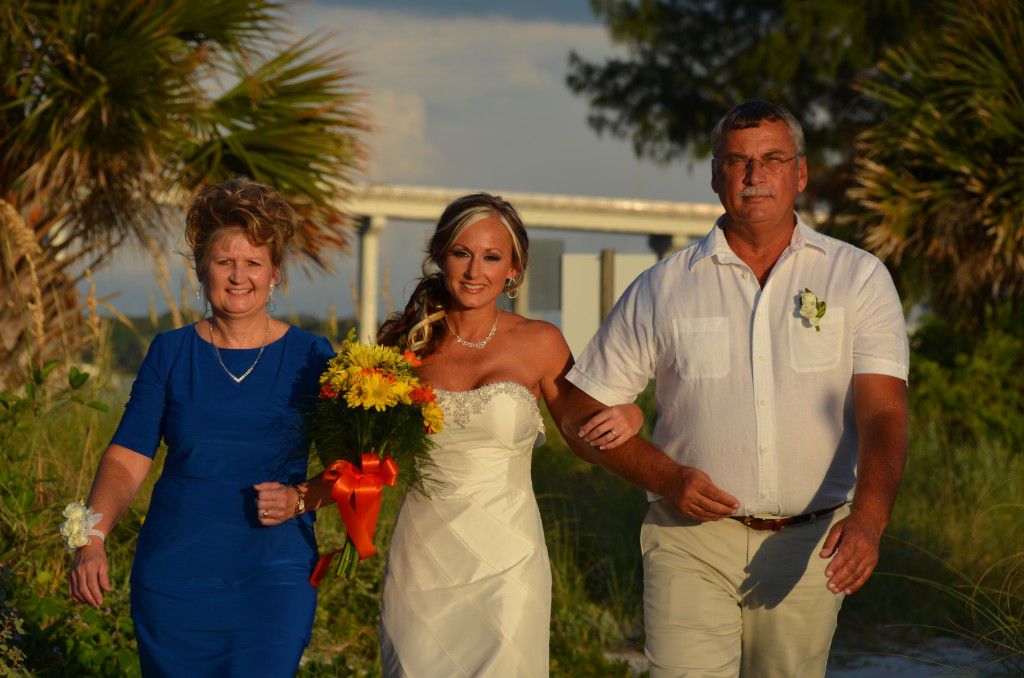 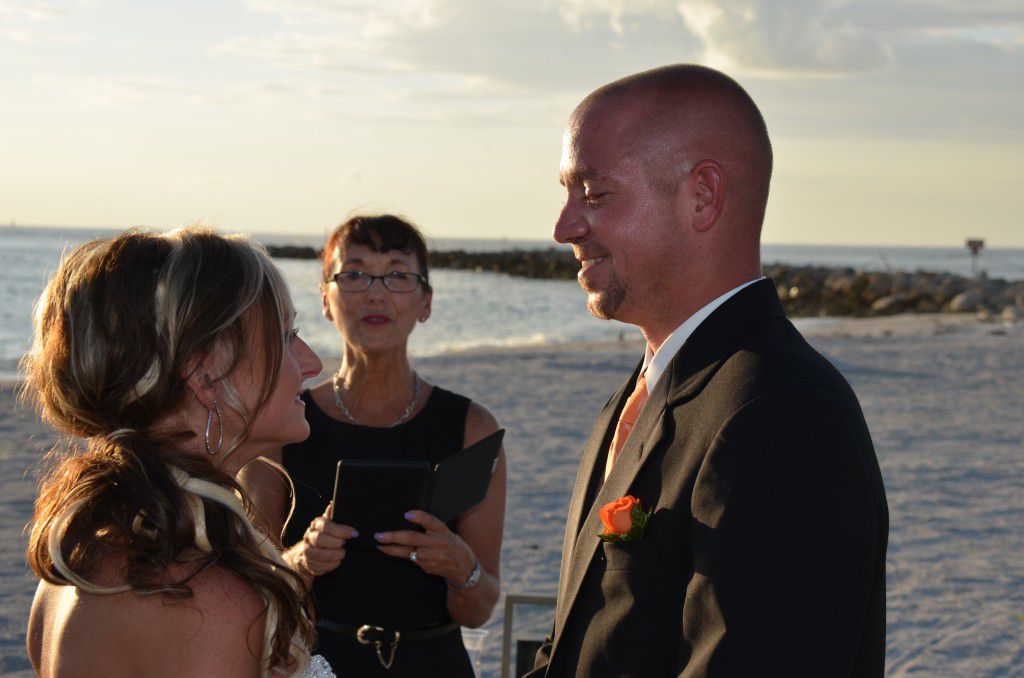 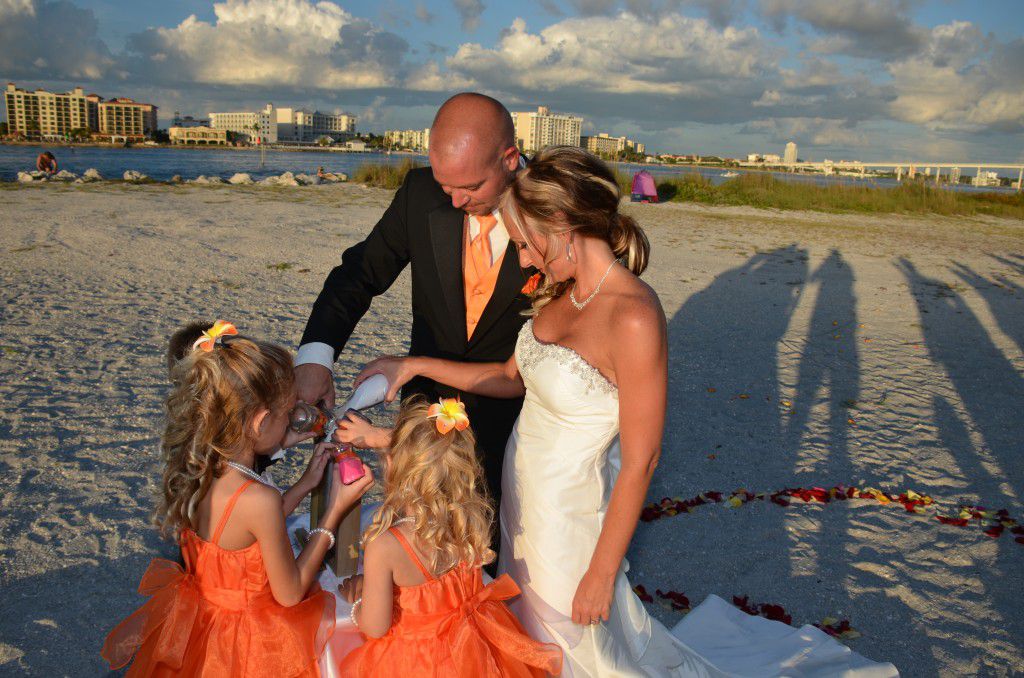 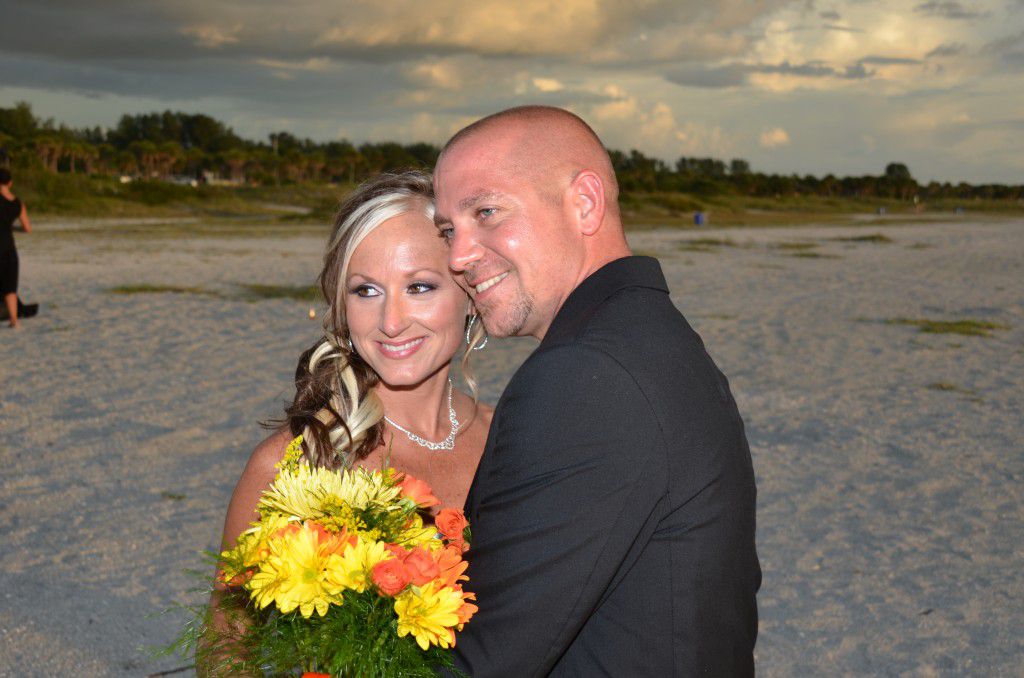